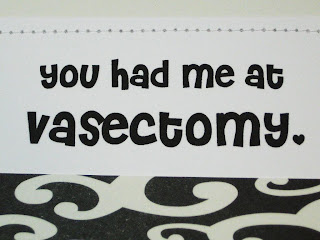 I feel like Janikowski has been training on my crotch.  Yeah, that's right, that was a SPORTS REFERENCE!  Overcompensating for lack of manliness is one of the side-effects of being freshly gelded.  Sure I had to ask the guys at work for that one but whatever! (for the record the exact wording of my question was "who's the best guy who kicks the football?"....pathetic)  Anyballs, I did it.  Just three hours ago.  I got snipped.

I felt a little apprehensive while I was sitting in the waiting room.  I also felt a little under-dressed.  There was this black guy in there wearing a tuxedo.  I think he was there for the same reason I was (too obscure or too racist?)  I'm fairly certain that the Valium I'd been given in order for me to "relax" wasn't doing the trick.  Then again prescribing a 230 pound man (yes, I'm calling myself 'man' now) a single 50mg Valium to relieve the tension prior to a vasectomy is like prescribing baby aspirin for the pain following a leg amputation.

I'd had a dream last night where the doctor performed the procedure in an elevator with a pair of my mother's orange handled sewing scissors (what the Freud?) and a lit cigarette.  It went better than that.  I won't get into the details of the procedure, but I did have some questions.  What was with the TUGGING?  How did you do that with a straight face? And, is it weird that the smell made me hungry?

So I'm infertile now.  I was given a little care package.  Some ice packs, two cups, and some instructions.  I have to bring in a sample in "one to two months or after about 15 ejaculations......"

I'm just gonna say my doctor needs to work on his conversions.....or maybe he needs to quit working late and go home to his neglected wife for FUCK'S SAKE!!

P.S. I'm self-medicating so I should probably wait to edit this post before I publish it but I think instead I'll just say 'sorry' here.  SOWWWWYYY!