Over the weekend Liam and I were having coffee at Starbucks.  Say what you will about Starbucks but I'm addicted to their Clover® Brewing System and apparently if you order one of their outrageously expensive coffees, and it takes too long because they're cleaning the machine, they'll comp it.  Score.

Liam and I were killing time entertaining the Healdsburg locals.  He's two, cute, and super-crazy social.  He was doing the rounds with his usual routine of running up to strangers to say 'hi', then acting shy and running away.  The effect of which was instantaneous.  Most of the clientele that day walked in with a severe case of the holiday blues and left with a new appreciation for life.  Just like 'It's a Wonderful Life' but without all the back story and parallel dimension stuff.  He should get corporate sponsorship from the Starbucks people.  Or at least free chocolate milk.  One lady even had to say "What a darling little girl! Oh, and what a fun age!!  This will probably be the first year she really gets it!"  Okay yes he's darling, yes he needs a haircut, and no...he doesn't get it.


By "get it" she was referring to Christmas and the presents and the whole SANTA thing.  I guess he may not be as advanced as other kids his age in his holiday appreciation because the Santa love hasn't kicked in yet.  Then again maybe he has a better understanding of Santa than the other kids his age.  While the other kids worship this strange old man who wants you to sit on his lap and tell him your most heartfelt desire, Liam's instincts are more appropriate.  Finn's too by the look of it. 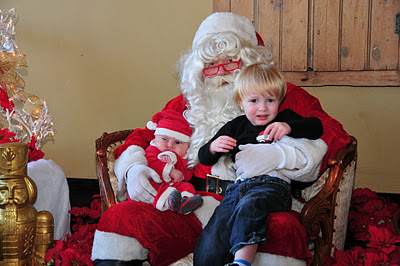 ﻿Maybe next year.  Still the gathering of family, the food, the general happiness, and all that good stuff isn't lost on him.  He gets that better than I do.  He's been a raging fireball of holiday cheer.  It really is incredible the effect these little people have on us, especially during the holidays.  They don't worry about money, or stress over 'what do I buy', or wallow in the usual holiday self pity.  They're just insanely happy and it's contagious.  I realized that while the Sumatra Tapanuli is pretty fantastic my real motivation in loitering around the coffee shop was just to show my little boys off and spread their joy.  They definitely don't mind sharing it.  Well, except with maybe Santa.