God bless us, everyone.

I registered for my last class today.  This is a big deal.  Huge.  The last five years I've been working on my Associates Degree in Enology (that's winemaking) and now it looks like I'll be done this Spring.  My goal?  To some day soon earn at least an extra five bucks an hour.  You gotta shoot for the stars baby!

It was 2008.  Erin was working as a dental hygienist and I was Assistant Winemaker at a winery where I'd intended to spend the rest of my illustrious career.  We decided to buy a house.  This was a big leap for us and consequently it put me in the hospital with necrotizing lymphadenitis (my body reacts oddly to stress).  I bounced back quickly enough and moved on to the next logical step, kids.  Erin got pregnant but we were cautious about telling anyone at first.  We kept it to ourselves for 12 weeks which gave us plenty of time to consider the fact that we'd just bought a house we could barely afford and we were going to have a baby.  Was this the best idea?  We figured we should be fine.....just as long as nothing bad happened.  Literally the day after I told the people at work that Erin was pregnant, I was laid-off.

Erin and I will tell you the same thing; we have NO IDEA how we got through this chapter of our lives, but we did.  It wasn't easy.  There were times where things got pretty dark, but we made it out alive.  I eventually got back to work again.  After seven months of unemployment and interviews resulting in kindly worded rejection emails, I got desperate and took a job as a 'Harvest Intern'.  In wine-industry parlance this is known as 'The Bottom'.  Another eight months after that I found a permanent position.  I'm still there, not really doing what I was doing, and making five dollars less an hour (hence the goal), but the benefits are good and we're making enough to manage.

We kept our house which is amazing.  Erin did some stuff with our finances that I still don't understand.  Now we're paying our bills, our mortgage, and eating EVERY DAY.  I didn't even have to give up my favorite vice (thank god for home winemaking).  Granted our petty cash tends to jingle more than fold and our debt isn't going anywhere anytime soon but at least we're housepoor...not just poor poor.

Then there are the kids (see blog) 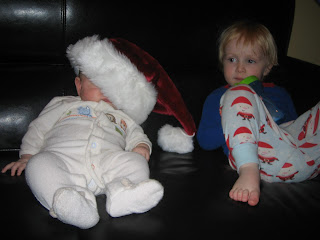 All in all this holiday season I have an assload to be thankful for.  I have two boy wonders and a wonder woman.  I have some okay friends and some kick-ass friends (if you're reading this you're the latter) some of whom may even be getting Xmas gifts this year! (thank god for home winemaking).  And soon I'll be back to where I was in 2008, raking in the four digit paychecks!  Now I know the 'Associates' is the cubic zirconia of college degrees so it's not like I'm suddenly going to be the first round draft pick at the next premium winery.  In fact my current employer's reaction to the news of my degree was a resounding 'Meh'.  But it's a big step in the right direction.  Besides the addition of that extra line on my resume forced me to shrink my font from 12 point to 11 in order to cram in all my mad winemaking skills.  That's going to impress the hell out of the right winery!  Right?