If you ever need a button pushed or a switch flipped, Liam is your man.  It's his job, and he's always on duty.  He can't get out of the car without locking his door, he must flip every light switch he passes, and remote controls are best left lost in the sofa cushions.  For the most part it's one of those slightly annoying but mostly cute toddler compulsions, but from time to time it's a real problem.

Back in the flush times Erin and I treated ourselves to a six-point surround sound system with a plasma TV and Blu-Ray DVD player.  Movie night is epic at our house as long as we get to watch the right movies (i.e. as long as Erin is away...the sub-woofer is sort of lost on Jane Austen).  The other night during LOTR just as Frodo was holding the ring of power over the raging fires of Mordor, and the neighbors were dialing the police, everything suddenly fell dark and silent.  I'd thought the power had gone out but as my eyes adjusted I could just make out a small figure outlined by the glow of the power strip switch.  The power strip into which every audio/video device in the room was plugged of course.  It was Liam hunched over his precious, his own, his switch...and he really wanted me to read If You Give a Mouse a Cookie


Another time I was in the garage retrieving clothes.  I'm incapable of using a dresser or a closet so my daily fashion choices are dictated by whatever happens to be in the clothes dryer (or on top of the hamper. DON'T JUDGE ME!!)  On this particular day Liam had followed me from the kitchen to the landing at the top of the small set of stairs leading down to the garage.  This landing is of course where the button that opens the garage door is located.  The noise of it made me jump, but it wasn't until the door was about a quarter of the way up that I realized what exactly was happening.  I don't really believe that Liam understood the cause and effect involved in pushing that button, but that didn't diminish his delight in witnessing my mad spaztic scramble through the obstacle course that is our garage, up the steps, and into the kitchen, wearing nothing but white socks.  I'm hoping whatever the neighbors had glimpsed was a blur. 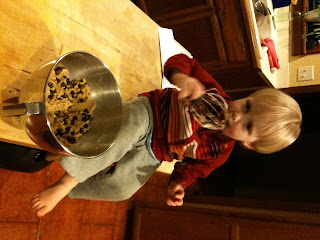 The most trying little trick of his though is the one that he's perfected.  My car key has that button that lets you remotely lock and unlock the door.  The designers of this key included a feature where you can press the 'lock' button twice and the car let's out a short 'honk'.  Press it four times and it honks twice.  Press it over and over again as fast and for as long as you can and it sounds as though your asshole neighbor has let his two-year-old in the front seat of his car to wail on the horn at 6am on a Sunday.  Liam learned this trick pretty fast and now will abscond with the keys, usually while I'm on the toilet, and will oh-so-quietly tuck himself into some remote part of the house before letting loose.  The good news is he's easy to find.  I just scream "LEEEEEE-YUUUMMM!!!" and follow the belly-laughs.  He's an evil genius.