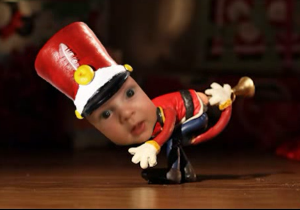 Today someone asked me how different my second son is from my first.  I had to really think about it.  Finn is two months now and Liam at two months looked a lot like him.  They're both equally awesome.  They both think I'm awesome....which is awesome.  Nope, the only real difference I can come up with is the farting.

Liam was a little colicky.  I remember nights of him screaming in agony while I bounced him belly-down on my knee while working his little legs around like he was riding a bike.  Anything to work out the farts.  I got pretty good at it too.  Some nights I'd coax out a ripper and I'd feel like such a hero.....the smell of victory filling my nose, like napalm in the morning.

Finn doesn't have any problem with the gas.  None.  Everything moves through him unhindered.  The problem is his farts aren't baby farts.  They're man farts.  Deep and sonorous.  Sometimes lasting impossibly long.  The good news is he sleeps well, the bad news is people are starting to think I'm incontinent.

There's NO WAY anyone believes my "it wasn't me" look.  I've tried "Oh! Nice one pal!", but I can feel their eyes rolling at me.  Now I just try and pretend nothing happened but it isn't easy.  Particularly in silent environments like bank lines or waiting rooms because, of course, the quieter it is the more relaxed he feels and consequently the more freely things flow.  But in the end it's a small price to pay for a happy baby.

Plus it's kind of awesome.  In fact it might tip the scales of awesomeness a bit in Finn's favor.  I guess when people ask me what's different about my boys I'll have to tell them "Finn here is slightly more awesome".  Sorry Liam.