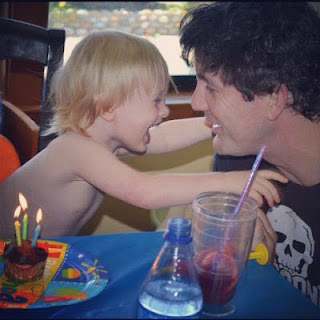 Liam turns three today.  The reaction I get from people hearing this news is pretty universal "I can't believe he's THREE!  Can you?"  Frankly yes.  Three sounds about right.  It would seem as though exactly 36 months has passed since his birth.  I've never really felt that quick passage of time I'm supposed to feel.  If anything it seems longer.  This may be due to the fact that since his birth I've been drinking less and sleeping less so now I'm more conscious of time's passage....or more to the point, more conscious.  But it might also be due to the fact that I feel as though my life before my kids is ancient history.  B.C. = Before Children.  It feels like an eternity has passed since then.  Good riddance to those days.

Our celebration amounted to two take n' bake pizzas and a three-kid play date on Saturday.  This turned out to be the perfect sized party for a three-year-old.  We had his life-long friend Andrew over who is three months older than Liam and invaluable in so many ways (including for translation since he speaks adult level English as fluently as he speaks toddler).  We also had over his much older buddy Arlo, whose enthusiasm for playing in a pool is enviable and something to which we all should strive. Way to keep it real Arlo. 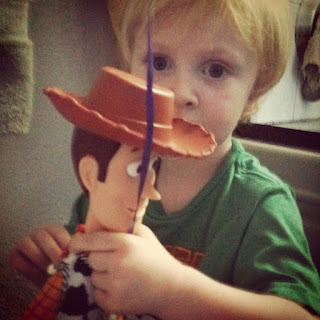 As for the loot he scored this birthday, the generosity of our friends and family is just ridiculous, with the exception of Liam's parents who just got him a balloon.  That's right, one single balloon for his third birthday.  We love you that much son.  The apparent winner was his Auntie Kat and Uncle Neil who gave him the Woody doll from Toy Story which frankly still has me star struck.

Fun fact: in that picture Liam is peeing in his potty.  You can totally tell.  It was the only time he held still long enough to be captured on film.  He's also still holding his precious balloon from Erin and I.  We love you son.

As for today, his actual birthday, who knows what kind of a day he's having.  I stole a quick kiss from his sweaty little forehead at 5 this morning as I left and I won't see him until 6 tonight.  Part of me would have loved to have taken the day off from work and stayed home with him but then again it's Tuesday, which means he's with my parents.  They're much better at spoiling him than I am.  He'll probably spend the day playing at the park and not eating fruit.  Oh well, he deserves it.

Happy birthday my little man!  I love you more than I ever thought was humanly possible.
Posted by Unknown