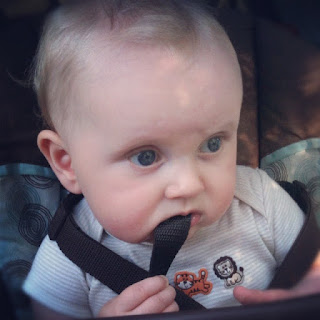 Finn is ten-months-old and quickly becoming a little person.  It takes awhile to move out of the doughy turd-monster phase but it's happening.  His greatest interest these days is checking everything to see if it's food.  Shoes, toys, remote controls, my face, and even at times actual food, all get the chew test.  If he's not gnawing on something he's usually scooting full steam across the floor searching for something to put in his mouth so he can check it for edibility.  Sometimes it takes him some convincing when it's not.  Two days ago he spent a good fifteen minutes on a plastic hammer.  He took it out of his mouth at one point, regarded it smartly with crossed-eyes, then stuck it back in his mouth having convinced himself that it was definitely getting smaller.

Liam's newest interest is cinematography.  He's currently filming 'Toy Story 4' with my iPhone.  I've only seen the rough cuts so far but it's looking much more avant-garde than its predecessors.  There are a lot of long tracking shots, very little dialogue, and a bold deviation from the classic deterministic aesthetic of plot to a more improvised manipulation of the mise-en-scene which underscores both the naivety of the audience and the absurdity of human existence.  Here's the teaser-trailer:

See what I mean?  I'm all for supporting his interest in the arts but I'm kind of worried about his playing with my phone.  Partly because he's going to break it and partly because it's like letting him play with a mini microwave oven (bad parent!) but mainly because he's so savvy with the thing that he's probably only three clicks away from taking a shot of me on the toilet and posting it on Instagram.

It's SO going to happen too, especially since we've been sharing so much potty time together now that our cycles are synced up (just as they do when any men share a house).  Oh well, at least when he has my phone I can take comfort knowing it's not in Finn's mouth.
Posted by Unknown