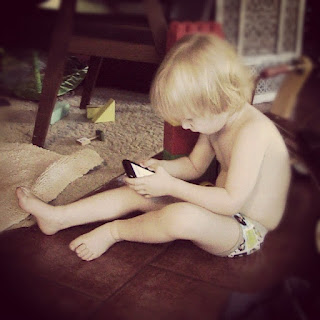 Liam is kind of killing me with the underpants.  They're TOO CUTE!  Seriously, I don't know what it is but since he's been wearing them I've had to smother him with extra kisses and cuddles.  I think it's because I'm used to seeing him with a big bulky diapered groin and not his precious little tiny cartoon wrapped butt.

We started him on the cho-nays just last weekend.  The idea is to make him uncomfortable when he goes to the bathroom in them and man does it work.  He's only had two accidents so far, number one and number two respectively.  In each case the look he gave me was one of shock and indignation as though I was somehow the culprit.

I was against the idea initially.  Potty training is a delicate matter and I never wanted to do anything too aggressive.  I'm all for letting him ease into it at his own pace.  I worried that taking away the comfort of a diaper was just a small step down from the electrocuting dog collar.  But Erin recently invested in the potty training package complete with reward stickers, books, and an incredibly irritating video.  Liam loves everything about it.

Generally it's been one of the more exciting milestones but it's also a little stressful.  I've definitely got an elevated sense of awareness now knowing that my day could be interrupted at any moment by a rogue mud monkey.  I've taken to studying Liam's expressions more closely but he's been hard to read.  He's got a great poker face right up until it's too late.  Also it's hard to fight the natural reaction one would have when suddenly finding themselves sharing a couch with a preschooler and his new pet fudge dragon.  But calm and casual is the key.  If I belt out a sudden "GOOD GOD ALMIGHTY!!" and dive headlong across the room like the thing is going to bite me, I risk messing him up for life.
Posted by Unknown