The other day I was grumbling again about the fact that I haven't been able to take my kids to Michigan in ages. Who on earth can afford three plane tickets? Let alone car rentals and food for X amount of days and those awesome Kalamazoo souvenirs...certainly not a single mother who can't even afford internet, or to replace her nine-year-old Converse. Come on!

Whenever I start feeling sad about the fact that my kids don't really know their cousins, or my best friends' kids, or understand the Greatness of the Great Lakes - I make a point to reminisce about the last time I took them to my land.

It wasn't all that bad. We got through the requisite bouncing around visiting friends and family and not really connecting with anyone because we were in a hurry to go see someone else. We squeezed in a bluegrass music festival which, when attended with a one year old who needs naps, was not the most pleasant experience, but we made the best of it. We even visited Ohio, where my dad's beloved side of the family lives. We were all over the place!

Things didn't start to go bad until we were driving to the airport in Chicago, for our trip home.

First of all, it was raining like the Endtimes were coming. Traffic was worse than usual. As in, not moving. Whatever was causing this standstill was so bad that we had to be redirected off of the freeway and onto back country roads where eventually the detour signs just...disappeared. If you didn't want to wait for the assigned detour, apparently it was acceptable to just turn around and drive against traffic in order to get to any number of previous exits. Did I mention that Baby Evie hated to be in the car and so was usually screaming or yelling or crying to make her position known to all those surrounding her? There was that, too.

By the time we made it to O'Hare, I was pretty frazzled. Also we were running late.

To return our rental car, I had to get creative. I stopped by the shuttle kiosk and unloaded Jonah, surrounding him with all of our suitcases so that he felt like he was in a castle and wouldn't get scared. I said "sweetie, I need you to guard our castle for just a couple of minutes, I'll be right back, okay?" "Okay mom!" he said with cheer. I then drove the 80 feet away to drop off the car, after wrestling the stroller, Evie, and Evie's car seat out of it. I managed to wheel everything back over to Jonah, Evie dangling precariously off of first my hip, then quickly my upper thigh, then settling down by my knee as I walked.

Lip a-tremble, Jonah shouted "I thought you were never coming back!" as soon as he saw me. We'd been apart for approximately one and a half minutes. As I arranged all of our clunky traveling instruments, I comforted my son and tried to get my heart rate under control. The other people waiting half-smiled and made space for us on the aluminum bench. Then they all, every last one of them, looked behind me and then just left, en masse. It was like they'd planned it as a prank or something. In a panic, I wiggled Evie off of my lap so that I could stand up and peer over our wall of luggage to see what the heck was going on. I saw all of my fellow passengers hustling across the parking lot under umbrellas and newspapers, heading for a shuttle that was parked way over there.

Why those assholes chose to leave without telling me about the random shuttle stop change or to, heaven forbid, help me and mine get to it, I'll never know. But I immediately put a curse on those jerks and made my way through the pouring rain and puddles toward the now-leaving shuttle. I saw that it had to then pass by the original, marked pick-up point, so I turned us all around and began running like hell to where we'd begun, Jonah splashing behind me with his appointed rolling luggage. None of this mattered - the shuttle didn't stop. My heart rate started going crazy again. I concentrated very hard on not crying. I asked someone in the rental booth where I should wait for the next shuttle, and was directed to where I'd been sitting in the first place. I will spare you the details of that conversation.

Once we'd arrived at the airport, I lunged myself toward the nearest sidewalk check-in counter, where I was informed in no uncertain terms that we'd missed our flight. I stepped back into the rain while the gentleman there looked to see what my options were. I noticed a couple with one child in line behind me, the mother looking sympathetically at me and my kids and our luggage and car seat and stroller. I didn't return her kind smile because kindness makes me cry when I'm overwhelmed with hopeless emotion.

After about eight minutes I was directed inside to another counter and, apparently eliciting pity, was offered a free luggage cart to pile all of our stuff onto. I managed to roll it just inside the automatic doors before everything on it went tumbling off. I stood there staring at our belongings on the shiny floor, trying not to cry but beginning to fail. Within seconds, three men - two in suits - appeared from all different directions, re-stacked my luggage while maintaining the Midwestern manners of not acknowledging that I was in emotional distress and fighting myself to not show it, then disappeared back into the crowd before I could burp up a thank you. I stood blinking for a second, taking deep 'don't cry!' breaths, and then found my counter.

We ended up with a flight that landed us home sooner than our original would have. Sometimes missing a plane is like that, I'll never understand why. I called the man I was married to and left a message that we'd be getting in an hour earlier than planned, but since he was famous for both sleeping in and never answering his phone, he never got the message. I didn't find this out until after we'd landed in San Francisco and he was nowhere to be found.

Frustrated at having to spend over an hour extra in an airport with my over tired and over traveled kids, but relieved to be on home soil, I decided to buy us all a treat and wait in the food court on the third floor, where there was space for the kids to run.

Jonah got into the elevator first. I backed my luggage cart in next, then myself, then Evie in her stroller. "Third floor" I told Jonah, who pushed the button and then scooted to the back. When we arrived, I pushed Evie out in front of me while also pulling the luggage cart behind me, calling "come on, buddy" over my shoulder. I then looked behind me and saw Jonah - through four inches of rapidly closing elevator door.

"Jonaaaah!!!!" I screamed.
"Maaaaaaaaammmaaaaaaaa!!" he cried out, his voice fading as he went down.

"Oh my god! Ohmygod OhmygodOhmygodOhmygod" I said while pushing the elevator button. A woman came over to me, all business, and asked what was the matter. I quickly explained: "My! Elevator! Jonah! Ohmygod!!" She got the point, and said "you wait here, I'll go downstairs and look for him on the other floors." Just as she got to the escalator, the elevator dinged, so she stopped and quickly walked back.

When the doors opened, there was no Jonah. 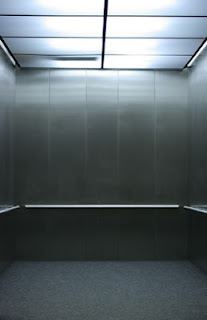 I wailed "Oh my goooodddddd!!" as I imagined him wandering among the thousands of bustling people arriving and departing. People who probably had been waiting all their lives for a beautiful, sweet, sunny little boy to call their own. I'm not usually a worrier or anything more than a raging under-reactor, but I was convinced that someone was probably luring my child into their limousine with a cool purple balloon right that very second.

The woman saw the empty car, looked me in the eye, and immediately turned on her heel toward the escalator again without saying a word. Evie was starting to whimper, so I summoned all of my Midwestern emotion-stuffing skills and after a deep breath was able to smile and say "Jonah is playing a game with us, that silly boy!" She seemed to buy this. I kept pushing the elevator button helplessly.

Finally it dinged again, and when the doors slid open, there stood Jonah, flanked by two amused-looking, silver-haired women. "Is that your mom?" asked one. Jonah said that it was and ran out into my arms. Not wanting to scare him with the gravity of the situation, I tried not to clutch him too tightly.  I said "wow kiddo, you really scared me, ha ha!" while trying not to cry again. He said "mom! When the doors closed, I was so scared! When they opened, those ladies were there and asked if I needed help, and I knew exactly what to say! I said THIRD FLOOR! And they let me push the button!" I laughed and tears spilled out of my eyes. "You are so smart to remember the third floor!" I told him.

I bought us all extra treats in the food court that day, I can tell you. And despite all that, I'm starting to save my pennies for the next trip. We'll just stick to the escalators.
Posted by Amanda Janik