Last weekend Erin and I left our boys screaming in the arms of my parents as we set off for an all adult weekend.  We headed down to the land of palm trees and Spanish tile: Santa Barbara.  We were there for four days.  Four whole days.  It was awesome.

The people of Santa Barbara are interesting.  Everyone walking the streets appears to be either on their way to yoga, homeless, or both.  Also they seem to go out of their way to try and get run over by cars.  I'd have been fine with that (I'm all for Darwinism) but we'd borrowed my parents' car for the trip and returning it smeared with hippie blood was a poor way to return the favor.

We arrived Friday night.  Erin and I did our best to try not to miss the kids too much.  We figured the safest way to make the transition was to go out for an extravagant night on the town. Until that point we hadn't made any plans aside from simply getting beyond shouting distance from the boys, so the night was wide open.  Fortunately we had our friend Shane, who lives in Santa Barbara, to offer up some guidance.

I don't know if I've mentioned Shane in this blog before?  The short story is:  I'm a little gay for him.  I suspect Erin feels similarly because ten seconds before we met up with him I popped two mints in my mouth and Erin lotioned both of her hands (true story).

Before we called Shane to meet up with him we tried surprising him at his house but he wasn't home.  Instead we found a surprise of our own... 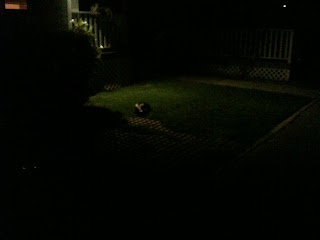 It's kind of hard to see but that's a skunk in his front yard.  I'm only sharing this non sequitur detail of our story because while Erin was taking this picture and remarking on how "cute" her shit-spraying rabid new friend was, I was using her as a human shield.  It wasn't my most chivalrous moment, but I didn't want to perform a wedding smelling like some rodent's ass glands. 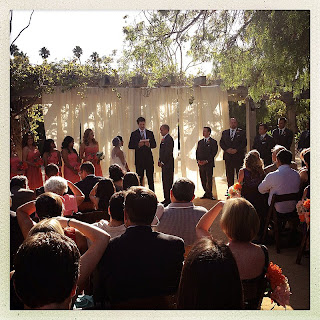 Oh, did I mention we were in Santa Barbara to perform a wedding?  That's right, I'm a goddamn man of the cloth!  My good friends Dee and Drew had bestowed upon me the honor of marrying them.  They gave me carte blanche in authoring the entire wedding script too!  Although they did have a few addenda.  They preferred that I didn't do the voice from 'The Princess Bride' and they weren't "entirely comfortable" with me including my five minute ham-bone routine.  Instead that had me include a couple of Mexican wedding traditions such as the 'Lazo' where the bride and groom get tied up together, and the 'Arras' where the groom 'symbolically' gives all his money to the bride.  Mexican traditions are all about subtlety.

Saturday was a full day of rehearsing.  First we rehearsed the ceremony, then we rehearsed eating and drinking all day.  Sunday was the actual wedding day.  I did an okay job...I think.  My brief part had some spontaneous banter, a bit of humor that got a laugh, and even a little Spanish.  I felt like a bit of a spaz though.  Afterward I got some unsolicited compliments so I guess I wasn't too bad.  My biggest worry was that I'd do something stupid and ruin what was easily the most beautiful, fun, and blissfully romantic wedding I'd ever been to.  Erin and I unanimously agreed upon that.  Dee and Drew were amazing and the reception was absolutely perfect.  I kept catching myself walking around with a big goofy grin on my face because I was just so damn happy. 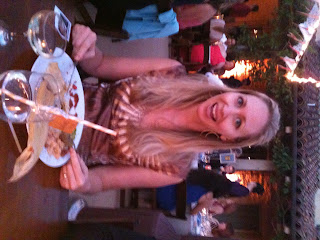 Erin had a great time too despite getting toxic chemicals sprayed directly in her eyes.  I was in the bathroom when someone started frantically banging on the door.  I figured someone had had a little too much  and needed the toilet for something awful, but when I opened the door a small group was escorting Erin with glowing green goo all over her face.  Apparently someone's fun little glow in the dark necklace had exploded right in her eyes.  Her EYES!!  She's blind now.

Just kidding.  She's a badass, and after a bit of rinsing she was back on the dance floor making me proud.  I think it was the magic of the wedding that kept her spirits up, but it may have been the guacamole.  I felt bad for not being there for her when it happened, but it was probably for the best.  If that toxic spray shot my way I likely would have used her as a human shield.

By the next day we had to hurry back home to the boys which was well-timed because, believe it or not, after four days we were actually going through some serious withdrawals.  Evidently Liam was too.  We found him pink-cheeked and in tears when we got back to my parents house in Berkeley that evening.  I guess he'd been inconsolable all day but luckily we'd had the foresight to buy him a few things before we got home.  Nothing cures a three-year-old's heartache quicker than Zachary's pizza and a new fire truck.  Finn, of course, hadn't even noticed we were gone.
Posted by Unknown