Lions and Tigers and Giants, Obama!

Monday night, after a long day of work and kids and writing, I finally logged onto my trusty news source: Facebook. And WHOA!!!!!! That thing had done a fair amount of exploding during my absence. Apparently there had been a baseball game (go Giants!), a football game (sorry Lions!) and a political debate (go Obama!).

I hate it when these things are happening. Don't get me wrong - I'm a big fan of hometown spirit and jovial camaraderie, and will probably even catch a game or two, in a pub, with friends, where we all know what is happening and can comment on it to people who know what our comments mean because they saw whatever we're commenting about. But holy foul ball from hell, Facebook has given free licence to people who love sports to assume that rest of us love them, as well. And that we actually know what they're talking about. And that we give a flying fuck.

I tried to address this once before:

Jesus christ you guys...I'm sorry, but after scrolling through a weekend's worth of status updates, all I wish - AGAIN - is that there was some sort of filter for completely random (to anyone not watching) sports references. Things like "YES!" and "Way to show 'em how it's done!" and "(Random Name)!" and "Swiiiiiiing!!!!!!" Aren't people supposed to gather in living rooms with bowls of chips and cans of beer and say this shit to each other in person? Come ON!

p.s. I love you all. Just not when sports of any kind are happening.

I got lots of supportive feedback (17 likes and 27 comments...only 3 of which were my friend Frank being sarcastic and once again giving me shit about how I write a stupid blog, which made no sense whatsoever in the context in which it was delivered. Still...*tear!*).

But of course the nonsensical gibberish sports shouting hasn't stopped. Take the following posts, for example: 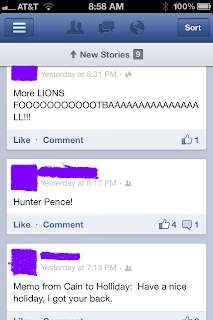 I get the first one...it means the Lions are playing football. Okay, that's easy. The next two are really confusing to me, though. I know it's deer season, but I have a feeling that second one isn't some sort of slang referring to being quiet in your tree, maybe pensively waiting for your kill...? And the 3rd one...was this supposed to be an inter-office memo that accidentally got recorded on Facebook instead? Woops!

Then there's this one: 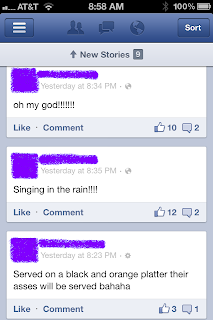 Um. I really have no idea. Nothing about any of these makes sense. The first one made me panic. What?! What happened?? Was there an explosion downtown? Should I gather my sleeping children and run for the hills from an alien invasion? WHAT HAPPENED?!?!

The second one is nice, I like that musical, too. Or wait, does that mean you went outside in the storm and sang some songs? That's pretty endearing, actually.

I can only assume that the third is a Halloween reference. Something about zombies eating asses...?

The first and second posts here were made by the same person. As you can see, they were made at the exact same time. This person first has a lot of enthusiasm about their baby. Then they ask to be put out of their misery, only seconds later! WHAT HAPPENED? What did your baby do?! I was really concerned!

Finally I got some clarification as to what all the fuss was about:


Apparently the San Francisco Giants won a baseball game. That is exciting! Also, the Tigers (a baseball team) are now Detroit's only hope, which leads me to believe that the Lions (a football team) lost their game. Both of these events are absolutely worth posting about during every single minute of the game. As is every sporting event that I and my fellow clueless non-fans get to read about at the height of every season. Thanks for sharing! Just a suggestion: Twitter might be more suited for such frequent, up-to-the-minute updates. Just...you know. So you know. Here's a link, please go sign up, and post away - as often as you want! It's encouraged over there.

The other exciting thing happening was the election. Apparently more people were watching the game, which frankly makes me a little bit nervous. If I could afford cable or internet, I'd have been watching the debate. As it is, I really enjoyed the highlights offered by my one friend who'd been watching. 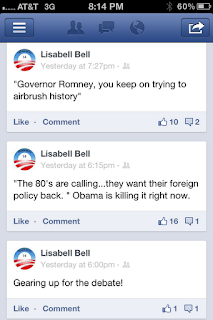 Anyway, I'm just so happy that my old home state team (Go Tigers!!) is playing against my new home state team (Go Giants!), that's always fun...and that baseball season is almost over! And the election is right around the corner! (VOTE!) And for the love of god, don't tell me every detail about it. I. Don't. Care.