How to Get Robbed and/or Killed on Craigslist

Recently, while Jessica was visiting, I sold my bike. I had two and thought that was frivolous for a girl who lives in a space the size of mine. I'm trying to save up money for an upcoming trip to Michigan, so I put an ad on Craigslist (not a sex one this time though), and the one and only person to respond showed up at my door about a week later, with a friend.

I suppose I'm a bit naive, though I prefer the kinder word 'trusting.' I invited the fellas into my apartment and led them to my balcony, where the bike sat after I'd wrestled it out of my storage closet. Jessica quickly disappeared.

While I showed the various features of the cycle to one of the men, the other asked if he could use the bathroom. I said "of course!" and told him where it was. He was in and out in a flash and when he joined us again on the balcony he casually sat down on one of my almost-broken bistro chairs. The men told me more of the story of why they wanted the bike than I really cared about, but no one can ever accuse me of not being a polite listener.

After we'd made our transaction and were heading out, they looked around my living room and asked if I worked at a preschool or was a teacher. I answered that I owned a kid's used stuff shop in Healdsburg. They started asking lots of questions about how business was, what my policies were, how long I'd been in business, and other boring whatnot. Meanwhile Jessica loudly did my dishes.

When they'd finally left, I walked into my kitchen to see a wide-eyed Jessica holding my biggest, albeit dullest, knife.

"I was so ready to jump on those guys if they tried anything" she told me heatedly. I laughed and poo-pooed her while she went through all of the reasons I was an idiot and questioned why the one guy had asked to use the bathroom right away but then barely spent any time in there. "He was casing the place!" she insisted.

"I don't have anything to steal!" I reminded her. "They just paid me money for the last thing I owned that had any monetary value!"

"Huh. I do have some underwear in there...but whatever, it's old and stained anyway, who cares?!" I checked just to be sure though, and the undies were still right where I'd left them - inside my pajama pants, in a small heap outside the shower. "There are soap bubbles in the sink, he just needed to wash his hands," I reasoned.

"Hmph," she replied. "And what the hell was that whole 'making himself comfortable' on your balcony chair all about?!"

"He probably just wanted to rest! What's weird about sitting on a chair?"

"It's just weird. And why did they want to know so much about your business? Now they're going to show up there and rob you!"

"Oh my god!" I rolled my eyes. "There's never more than eighty bucks in my till, they'll be pretty disappointed!"

She noticed the dull knife clutched in her hand and looked at it with disgust. "I was looking everywhere for a baseball bat...I was looking all over Jonah's side of the room...WHY DON'T YOU OWN A BAT?!?!" 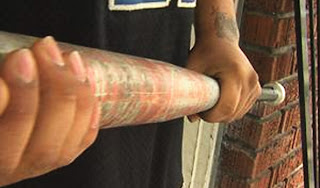 I have to believe that those two big guys meant no harm. Because I believe in the goodness of mankind. Also, Jessica isn't around to protect me anymore, and I still don't own a baseball bat.
Posted by Amanda Janik