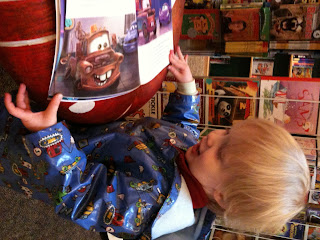 Monday morning I got a "talking to".  One of the teachers that runs the bi-weekly Roots and Shoots program Liam attends gave me the universal "before you go I need to speak to you for a moment, in private" gesture.  I thought "uh-oh.  Is he biting?  Are his poops too awful?  I'm sorry, he loves cheese.  Is he too good-looking and it's making the other kids uneasy?  Is it ME!?  Was it obvious I forgot today was my day to bring the snack until 10 minutes before class??  Was it because I showed up smelling boozy that one time?!  I was working on my home wine that day, it was just my wet pants, I swear!!  WHAT?!!"

"We're a little concerned with his speech," she tells me.

This was four days ago and I get now that Liam's being a little behind the curve is really not a big deal.  I've told a few moms at work about it and have heard enough anecdotes from those whose kids "barely said a word until they were four" to really worry too much.  Plus I was a late talker and had specialists recommending speech therapy for me well into my early teens (I remember my reaction was something like "Inawannagodaspeechthurpee!"), so no big deal, right?  Well for some reason hearing a helpful educator recommend that Liam try "a few exercises that will help him communicate better" sent me spiraling through the classic five stages of mourning.  No really.

Denial:  No, you're confused.  We're pretty sure he's just created his own language that's a hybrid of English and Japanese and you're just not smart enough to understand it.

Anger:  I should have NEVER let him watch TV!  Yo Gabba Gabba has destroyed his brain!  Curse you DJ Lance!!

Bargaining:  He doesn't need any special help, it's me!  I need speech therapy.  He's just copying his parent's garbled speech like Nell did.  I'll start today.  Where are the flash cards!  Watch this 'par-si-mon-i-ous'...SEE!  We're good!!

Depression:  That's it.  I'm done.  I'll never know joy again.  This world is a deep dark chasm of misery and I should have never been born into it (I'm using a little hyperbole here)

And finally Acceptance.  This really is NOT that big of a deal.  Liam's never had the same level of vocabulary as the other kids his age and we inquired about that early on.  All the experts say the same thing, "He's fine.  Kids progress at different rates.  All that matters is that they progress."  So why did I panic?  Why the overreacting?  Why did I suddenly feel like I'd somehow failed him?  Do other parents do this?  This is the first time a qualified professional has pointed out that my child isn't perfect and I kind of lost it.  Pathetic.  What will happen when he has a real problem?  I'll probably have to be institutionalized.

We all want our kids to be happy and healthy and I'm really lucky to have two kids that are both.  My first reaction was pretty lame but now I'm kind of excited about doing a little extra homework with Liam.  He loves talking, so helping him do it better will be pretty cool.  Yeah, for a moment I felt like I must have done something wrong since all I should ever hear is that my kids are the best at everything they do, right?  Maybe I'm the one that needs therapy.
Posted by Unknown