Mike has been harassing me about posting and honestly, I've got jack to write about. I mean, jack in terms of parenthood-type stuff. My kids spent the recent holiday with their dad, and are there again till the weekend. As tends to happen in these cases, I find myself compelled to write about non-parenting stuff. Like how hot I am.


Can we just take a moment to reflect on how HOT I am in this stage of my life? I'm not kidding. In general I can be a bit self-deprecating, and almost anyone who has ever been nice to me can tell you that I'm fairly awkward at receiving compliments, especially about my appearance, which I'm convinced is maybe, somewhat "cute/average," at best. I make a lot of jokes about myself and at my own expense, and suppose that if you knew me well you'd think that this was another one.


But its not. I really, really am hot right now. 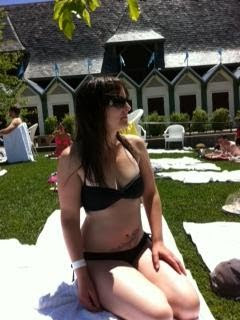 I used to be quite thin, and grew up eating whatever the hell I wanted because I never really gained weight, Tra la la la la!! (Also because there were no actual 'meals' happening at my house, and we had to fend for ourselves. I'm really good at melting butter and cheddar cheese over elbow noodles...) During my senior year in high school Mr. Potts got mad at me because I was the only one in class who hadn't given blood for some particular cause. When I balked and said I didn't meet the weight requirement, he grabbed my elbow and marched me into the boy's locker room, where he made me stand on the scale to prove it. Which I did.


At home we knew a woman who came over often, a rather large woman, who would watch me cross the room with a look of disgust on her face and say sweet and encouraging things to say to a self-conscious girl, like "just you wait, you little bitch (she meant this in the nicest possible way), once you hit 18 it won't be so easy anymore," to which everyone would laugh. Once I hit 18 and remained lithe, she would say "just wait until you have babies," to which I would reply "ha! Jokes on you, I'm never having babies!" Tra la la la la!!


I actually maintained a pretty normal weight until I met my almost-ex-husband, and started eating. A lot. We lived in the Rockridge neighborhood of Oakland and would eat out at some mighty fine restaurants back in the day. I might have done the old "fall in love, get fat" thing.

Contrary to the warnings though, after I did indeed have a baby (ooooops!), I dropped the weight fairly quickly. I was Super Happy, I walked everywhere, I breastfed 24/7, all of which made for a reasonably slim mama. Then some stuff happened - we moved to a place I hated, I got depressed, I got pregnant again, had another baby (non-oops), sat around a lot eating pizzas, thinking about going for jogs but not actually doing so, and so I kinda just kept that weight on. Having grown up with no dietary education whatsoever, the thought of altering the way I ate or exercising (shutter) were so foreign to me that I simply could not wrap my head around the idea of eating a salad instead of cheese enchiladas. Why? No, I mean really, why would you eat a salad when you can have cheese enchiladas? They're soooo gooooood!! I joined the Y and would keep track of how many calories I'd burned (I hated thinking in terms of calorie numbers, it still makes me cringe that I actually 'went there'), and if I burned a ton I'd think "awesome! Way to go me! Oh, but now I'm below what I should be, so I guess I can go have a burger and a beer. I love this!" 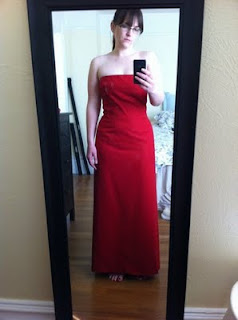 Fast forward through the years up to about 9 months ago. Long story short - divorce stuff started happening. I got kind of stressed out and lost my appetite. I forgot to bring myself lunch to work, would be too busy in the morning for breakfast, and would be distracted during dinner, so ended up eating whatever the kids didn't finish. I ate a lot of trail mix. None of this was intentional and I didn't even notice any change until one day I was packing to move out of my much-loved home, and I came across my wedding dress. Naturally I tried it on, what scorned bride wouldn't? And, just barely ten years after that sunny, slimmer-me day, it fit. For the first time in ages, I actually looked at myself in the mirror. And then I thought "hot damn!"

I did the usual stuff. I did a wii weigh-in and discovered that I'd lost 19.8 pounds...in only 557 days! I bought a bikini. I started wearing eyeliner more. I braved tee shirts again. My $1 Salvation Army jeans became too big for me, so I tentatively traded them in for a smaller pair. I started lifting my head and making eye contact, with actual men, in public. It was suddenly all very shiny and foreign, and slightly scary, but I've been toughing it out. I don't expect it to last, I'm aware that I'll likely put the weight back on at some point - especially since I still shy away from fitness in general.


My favorite part about losing weight has been running into people that I haven't seen for a while. Its a really good indicator of where I kept my weight, because without fail they say "wow! Have you lost some weight?!" while waving their hands under their chins and around the sides of their faces. Now that I think about it, I suppose it would be rude to wave their hands around their saddlebags or to circle their muffin-top areas...maybe the face is the polite place to make 'you're not as fat' gestures. My friend and I tried to draw examples of this over pizza and beers recently: 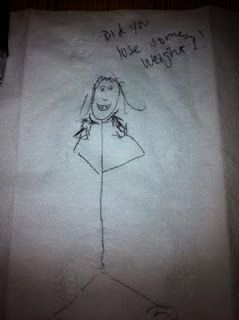 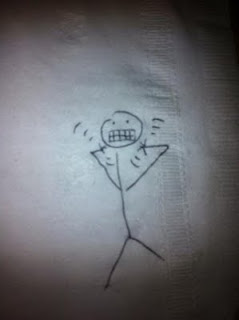 I realize that in order to keep my new fantastic-looking body, I need to remain depressed, angry and bitter. Under NO circumstances must I become too smitten with someone or, heaven forbid, start going out to eat or letting someone feed me delicious meals. I MUST NOT fall in love.

Hey, this ain't my first rodeo.