Yesterday Finn gave me a quick refresher course in You're Doing it Wrong 101.  Monday is my one day a week where it's just me and the boys and I know I'm supposed to just keep it simple.  I'm not supposed to make any plans beyond the basic needs for survival and entertainment, but for some reason yesterday I thought to myself "hey, I've got the day off, I should take care of some business."  What am I, new?

My mission?  To convince the Santa Rosa Junior College that they owe me a degree.  I just finished their program two weeks ago but there's been some confusion regarding the details of my completion.  I couldn't take their junior college level Organic Chemistry class because it conflicted with my work schedule so I took an online Organic Chemistry class through UC Berkeley, naively assuming Cal's educational standards were up to snuff in the eyes of our local junior college's strict standards.  Luckily I prevailed and my degree was given the okay, but I had to pay the price for my arrogance by spending three hours in the school counselor's office waiting room yesterday, with Liam and Finn.  They were not amused.

They survived, just barely, and I got them home for lunch but the damage was done.  By two in the afternoon Liam was napping but Finn was inconsolable, and I realized I hadn't eaten anything all day.  I went with my old quick-meal standby, cereal, which was stupid because it requires two hands and Finn wasn't going to allow me to put him down any time soon.  I tried holding the bowl in one hand and slurping from it like a pig but Finn let me know what a good idea he thought that was by pulling the bowl a couple of inches away from my face then quickly letting go, causing me to split open my upper lip on the bowl's ceramic edge.  I recovered after a few minutes and decided to get a spoon.  This meant that I had to set the bowl of cereal down to eat from it but the only surface high enough to allow me to eat while standing was the top of the refrigerator (yeah, I'm tall).  This worked out okay for two bites but by the third Finn decided to grab the bowl again and dump the entire thing down my front.  After that we had the following telepathic conversation: 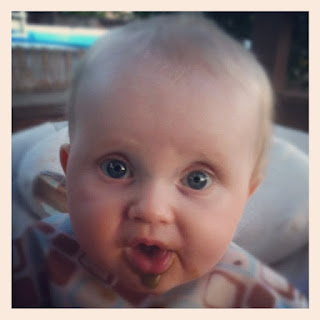 "Now what did we learn today daddy?"


"Are you kidding me with this shit pal?"

"Hey! I've got a belly full of sweet potato puree and I'm NOT AFRAID TO USE IT!  Answer the question!!!"