My measly A.S. in winemaking from Santa Rosa Junior College has done more for me since Monday than my prestigious B.A. in English from UC Davis has done for me in fourteen years.  Go Aggies!!  Within days of me having to shrink my resume font from 12 pt. to 11 pt. in order to fit in that extra line, my current employer posted a job opening that required an "associates degree in chemistry or equivalent".  That's me!  The rest of the requirements were basically a laundry list of phrases describing me.  Erin thinks it's too much of a coincidence and therefore the position must have been created with me in mind.  I think that's ridiculous, though the bullet reading "must have an inwardly over-inflated sense of self importance balanced with an outwardly self deprecating sense of humor" was kinda eerie. 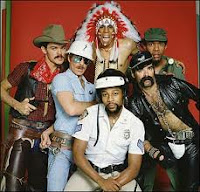 So I got a promotion.  TODAY!  I interviewed for that shit and they were like "okay".  For the 'professional artist' readers the promotion I'm talking about isn't like the one you did for your friend's band, this kind is where the people I work for give me more important stuff to do and more money.  My new title is "Quality Lead Assistant".  No, I have no idea what that means.  But then again all the best jobs are just three impressive sounding words mashed together.  What does "Chief Executive Officer" even mean?  It sounds like half of The Village People.

In a nutshell I'll be doing some lab stuff, some wine making stuff, and some middle-managing (eww).  In an even smaller nutshell I'll have my own desk but I'll still have wine stains in my underpants.  What's funny is people are going to give me that head-tilt of concern and ask "but...I thought you wanted to be a winemaker?".  I'd like to think I always have been.  My close friends can attest there's never less than enough home made wine in my garage to kill a small army.  But I get it, I am supposed to be a professional winemaker at some edgy family-owned winery that makes impressive and expensive small lots for the culturally elite.  Well, I had that job but it went away.  Those charming little dream family wineries tend to be a bit dysfunctional.  Actually more like Long Day's Journey into Night dysfunctional.  In my case that meant that after earning the title of Assistant Winemaker for said winery I was binned with a week's notice and no severance during the peak of the recession.  "Thanks for the past five years of your life but this business is HARD.  Good luck and congrats with the new baby!"


Fast forward a year later and I find Fetzer Vineyards.  They're environmentally sustainable, they're huge, they offered to pay for my school, their benefits are amazing, and they've been around forever (for a winery).  Not to mention there's a hippy-esque love that runs through the place that I kind of like.  Very 'Kumbaya' but in a way you don't mind.  Also people never leave that place.  The average number of years worked there by just the people in my department is over a decade, and some people have been there three times that long.  I learned this when I started and saw it as a good sign.  Anyway it's been three years since I got laid off from my last job and I'm finally back to making what I need to be making and I'm at a winery that isn't going anywhere but up (hopefully, we just got purchased by Concha y Toro.  I'm Argentinean!!).  While the small wineries are like nightmare families I'm finding the big successful companies to be more like...well, big successful companies, which is great because I have plenty of family at home and they're kind of counting on me.
Posted by Unknown