Even though I'm kind of late getting into my 40 Days of Writing writing today, and even later on the whole 'Father's Day' thing, I'm going to tell you about my dad. I mean, you know about all of my brothers, and my sister, so why  not one more family member? 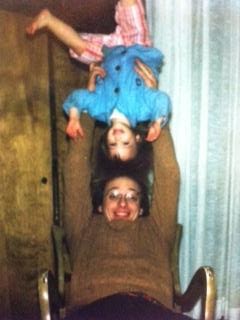 My dad - Gene, or Geno if you're in the know - is a very mellow, laid-back kind of a guy. I inherited a few things from him...the mellow, laid-back thing; a dry, sarcastic sense of humor; protruding upper canines (affectionately dubbed 'The Janik Teeth' by yours truly...my brother Chris has them too, yay!). Aside from the teeth, this is a good study in Nature vs. Nurture, since I didn't grow up with my dad. He was around - sometimes closer than others - but my time with him was sporadic and consisted of weekends here and there or some weeks clumped together in a summer.

I could go into all of the ins and outs of growing up in this fashion, but instead I'll just give you a Top 5 list.

My Top Five Memories of Geno:

1) Dad's good friend Michael had some land out on Rupert Lake, on which they'd erected a Teepee. Dad patiently taught me to swim there. When dad was living in the area (for a while he lived in his home state of Ohio) we spent a lot of time swimming in Rupert Lake. Naked, of course. Afterward, dad would walk out of the lake, brush all of the extra drops of water off of his arms and legs, and then stand in the sun, arms outstretched, to air dry. I would stand beside him and do the same. I didn't realize that nudity was out of the norm until much later, and I'm so glad for it.

2) One night Dad, Michael and I were laying in the Teepee, preparing for sleep. I looked out and saw a shooting star, and was young enough to believe that it had fallen to the ground - I was so excited about this! Michael and my dad discussed this with me, and tried to decide who among them should go retrieve the star.  It was finally decided that it was too far away, we would have to wait for the next one. I fell asleep watching the sky for falling stars.

3) On one visit to my dad's home, where he lived with his new wife, I had a meltdown. I have no idea what triggered it, but I do distinctly remember sobbing into my father's lap, crying "why can't you and mommy be back togetherrrrrrr? Why can't you be married agaaaaaaainn????" I wish I could remember what he told me because whatever it was, it worked, and I'd like to be able to tell my own kids this when they echo similar sentiments to me.

5) My dad is famous for his pizza. When I was 19 and preparing to move to California, he and his wife invited me to live with them for my last few months in town. I spent the time having an affair with my boss, staying up late, slinking in during the wee damp hours of the night, then unable to sleep because I'd had so many rum n' cokes at Club Soda. I'd sit on the edge of my bed listening to Radiohead's Exit Music (For a Film) from their OK Computer album far too loudly. Sometimes I would perch on the end of the bed, crying while I listened. I wasn't very discreet. No one ever complained or mentioned any of the above. I'd wake up in the afternoon with a tiny latte waiting for me next to the bed, in a sweet little espresso cup on a saucer.

One morning, however, my dad woke me up because we'd agreed to make pizzas together that day, and we needed to start on the dough early. My time in Kalamazoo was drawing to a close, and for the first time ever, he seemed slightly anxious.

I shuffled down the back spiral staircase of his old Victorian house, which dropped me into the kitchen. He had everything ready - olive oil, corn meal, flour, rolling pin, bootleg Grateful Dead tapes from shows we'd been to together.

My head was groggy and I was terribly hungover. He cheerily began to explain to me what we had to do, and tried to instruct me so that I could learn, hands-on. I apbruptly backed away and stepped into the adjoining laundry room to vomit a little bit. When I came out again, Dad was visibly disappointed. After a few more failed attempts at pizza preparation, I realized that he wasn't disappointed that I was dog-sick hungover, but that I wasn't absorbing this Tradition Passing Moment. I think he said something to the effect of "this is the time we have together to do this thing that is important" or...I don't know, I'm sure it was meaningful. I just couldn't grasp it because I was trying so hard not to throw up anymore and wanted so desperately to be back in bed that I may  have wept. Eventually he let me go back to sleep. I could feel his shoulders slump as I made my way back up the spiraling staircase, Casey Jones plonking in the background.

I never did master my dad's pizza, but we've collaborated on a compromised version many times now. He visits me in California twice a year, and its been fun getting to know both him and myself better as both of our lives change and evolve. He's a pretty great guy.