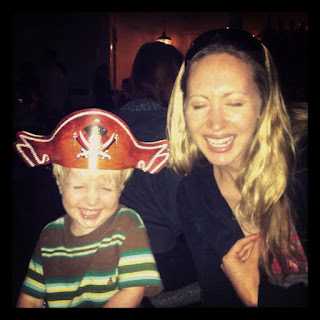 They say that admitting you have a problem brings you half way closer to resolving it (no. no body says that.  that's just stupid).  So I have to admit I may be addicted to my family.  This past weekend I was on my own for four days.  Every year my wife goes camping with her family and the kids and I sit it out.  Sure they're my family too but not when they're camping.  Ugh, even the word sounds dusty and uncomfortable.  Family Camp is awesome, that's different.  Real camping is for homeless people (wow that was insensitive).  So back to my addiction.  While they were gone I barely slept and when I did I had horrible nightmares, I barely ate, and I just felt generally uneasy and depressed.  Only after they walked in the house and I did the close hugging, face rubbing, IloveyouIloveyouIloveyou thing until they were fighting to get away from me like Pepe Le Pew's cat girlfriend, did I finally feel normal.  In fact I immediately ate a sandwich, fell asleep, and dreamed of unicorns. 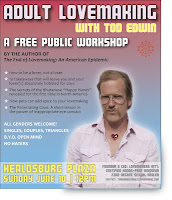 I don't think I'd been alone in over three years.  In anticipation of the impending weekend I had fantasies of parties in the city with old friends intermixed with slovenly wine and movie marathons.  That didn't happen so much.  I had occasion to celebrate what with the new promotion but not yet the means.  In fact I had $20 which wasn't even going to get me the gas I needed to leave town.  So in Healdsburg I stayed.  I partied a bit (huge thanks to the people that came over and cooled off in my pool after the Adult Lovemaking Seminar compliments of Tod Edwin) and there was a movie and a little wine too, but mainly just the aforementioned withdrawal symptoms (add to that schizophrenic-like parenthetical interjections in my blog.)

It probably isn't healthy.  Wasn't it Thich Nhat Hanh who said, "train yourself to let go of the things you fear to lose" (no. that was Yoda). If so I'm going to need a really good 12-step program, or better yet a 12-month "Learn to Love Camping Seminar."  Todd?