About a year ago, I was preparing for a trip to my home state of Michigan. I'd been dumped five months earlier, and was starting to believe the unsolicited advice I received surprisingly often that I just needed to 'get laid' in order to get over the insult from that. I was talking to my oldest friend Jessica, making plans for when I arrived, and advised her that maybe it was time I tried sex again. She thought this was a grand idea, and added that perhaps she, too, should give it a whirl.

This presented some problems. We both have a decent amount of baggage. On a recent visit to my land, she and I had driven to Mendocino in hopes of seeing some whales, and spent a lot of time commiserating on the trials of being unexpectedly single. "How will I ever get someone to love me again?" was a mutual concern. "How long will I have to suck in my tummy and shave my legs before someone likes me enough so that I can let myself go again?" was another. Then there was talk about uncontrollable issues like morning zits and surprise-farting and allllll those things we'd taken for granted in our relationships and assumed we'd never have to worry about again.

But, sometimes shit happens, and there we were. We knew that if we ever got someone drunk enough to ask us out, we'd have to deal with telling them about all of the dumb things that had landed us on that bar stool, and it made us very weary. So in planning our forward movement into the world of the dating, we decided that it would be easier to get all the guesswork taken care of upfront. "Let's make T-Shirts with our personal affliction on them" we decided. Yes! She and I love coming up with T-Shirt ideas! Here are a few favorites from that trip to Mendocino:

Be the Naked You Wish to See in The World

Fuck Those Whales, Let's Get Drunk!

There's So Much Junk in my Yahoo

We started brainstorming ideas for the T-Shirts that would soon find us new boyfriends without our having to explain our depressing pasts. We figured something concise and honest would be our best bet. For mine, we came up with: 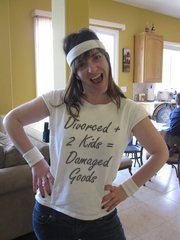 For Jessica's shirt, we had to get a little more creative. We didn't want her main goal to be mistaken for pity-baiting, so a shirt that simply said 'Widow' was out. We decided that a quick one-two punch would be best: 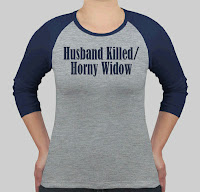 We realized that, even with our fantastic mystery-eliminating shirts, it still might be intimidating for a guy to ask us out without the much-needed male friend/wingman. Fortunately for us my second-oldest friend Frank's longtime girlfriend left him. There's a ton of material for Frank's shirt, what with his being divorced with two kids as well, since his wife decided she was a lesbian and all. Oh, AND he's a cancer survivor. Frank thought his shirt should say this:

but I thought that was a bit wordy, and in fact somewhat discouraging. In the end simplicity prevailed: 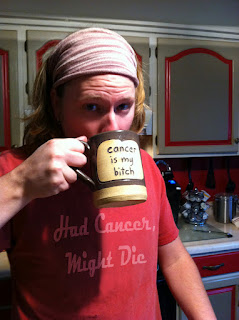 I didn't end up getting lucky on that trip to Michigan, hard as my friends tried to make it so. As it turned out I still needed a couple more months to gear up anyway. But still, I have the BEST friends, how would I get through anything without them? We've been laughing in the face of heartbreak and tragedy since about 1983, and I don't think we'll ever stop. 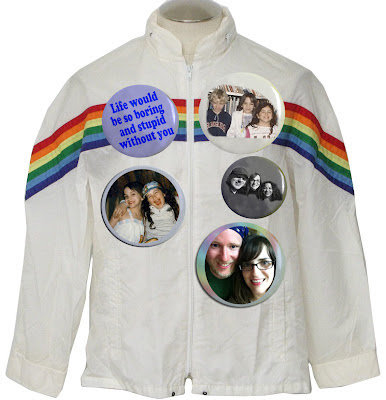