It's day 14 of my no work, no school, no outside daycare baby-bender and I'm feeling like a 24-hour nurse/maid/fry-cook for a couple of really cute assholes.  I can feel all of you stay-at-home parents rolling your eyes right now.  Rightfully so.

I've sedated the boys temporarily with pancakes, so I thought I'd share something of a cautionary tale.  No, it's not a 'NEVER HAVE KIDS!' rant like the kind people loved to share with me before I had kids (what the fuck is with that?)  I've always asserted that kids will make you happier and more fulfilled than you ever thought humanly possible.  True story.  This is just a reminder that even when you've had kids for several years, stay humble, you still don't know what you're doing.

Last Sunday one of my old friends from high school came up from the bay area to visit.  I really only have two friends from high school that I still make an effort to spend time with.  They're both girls and they're both totally hot.  This isn't a coincidence since the reason I tried so hard to get close to them in my teenage years was because that's how nerds scored in John Hughes' films.  The nerd best platonic friend turned love-of-my-life after the jock burned me maneuver.  It never worked out, which is just as well because now we can still hang out and drink. 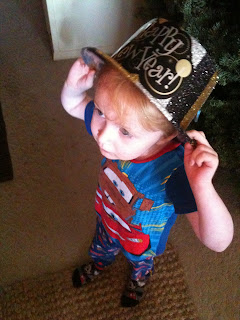 I still wanted to look good for said friend, of course.  This was tricky since I'd spent the day alone with the boys in a house that had been mildly devastated by a holiday dinner party the night before.  I still managed to clean a bit and even do some very selective laundry featuring my finest shirts and my one pair of jeans with the crotch intact.  All I had to do before Erin got home, and I could dash out to my rendezvous, was take a shower.  If any of you single parents out there didn't already stop reading, you know how challenging that can be.  Some caution has to be thrown to the wind, particularly now that Finn is walking and the Christmas tree is still up.  The key is to be quick.

I managed to get clean and dressed in ten minutes but I still came out into the kitchen to find Liam had filled a large measuring cup with greasy rancid meat-water from the pot I'd left soaking in the sink, and was sprinting through the living room.  "Stop", I shouted smartly.  He stopped, but the water didn't.  It sloshed forward onto the carpet, then back onto him.  He stood stunned for a bit so I dashed into his room, grabbed an alternate set of jammies and a towel, and pounced on him quick.

I took away his cup, stripped him of everything but his diaper, and toweled him off a bit.  The smell was hard to describe.  I guess a bit like warm death and cumin.  Liam was quiet and kind of hanging his head down.  I felt a little bad for yelling and for moving around so frantically to get him cleaned up.  I had been in a hurry but I realized that he was feeling bad now and maybe I'd overreacted.  I hadn't seen this friend in months but I could be another minute late.  Plus, it was likely this was all just his way of trying to keep me from leaving.  In a way it was sweet and he deserved nothing but my love and adoration.  I hugged him and quietly told him, "Liam, I'm so sorry I yelled.  I love you so much".  He answered by spitting a mouthful of greasy rancid meat-water on my finest shirt.

The point is, one of the most rewarding things about being a parent is, even when you've been in constant contact with your kids for 14 days on end, and you think you know all you can about them, that you've "got it dialed in", they can still surprise you.
Posted by Unknown