I'm guilty of a number of annoying parent crimes.  I used to think "When I'm a dad, my kids will never be allowed to do that".  But now we go for coffee and their hands go straight to the glass case full of goodies, they choose whatever they want, then proceed to throw muffin chunks at elderly women, all while I just sit there sipping my coffee, blogging about how awesome they are.

Lately I've been doing that annoying parent thing where, based on their interests in any given week, I'm able to determine the path of their adult career.  Finn's is pretty straightforward.  He'll either be a competitive eater or a soul singer.  The only thing more impressive than the volume of food that goes in him, is the volume of the noise coming out of him.  The boy has pipes.

Liam's is a bit trickier, but I've pretty confidently got it nailed down to one of two careers.  He'll either be a catalog model (his look is way too commercial for high fashion) or he'll be an abstract artist.  The second one is a more recent revelation.  Every morning this week he's been putting together the following piece: 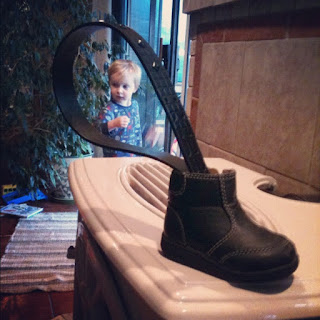 It's a belt in a baby's boot.  Nice composition, don't you think?  It's on ongoing series that is assembled daily with subtle variations (i.e. loop forward, loop backward, boot zipped or unzipped, etc.) and is then placed at different locations throughout the house.  It's a kind of "Elf on the Shelf" of abstract art.  When I asked him what is was he answered "boot" with that slight German effect like there's an umlaut in there somewhere.  I think he's paying homage to his influences such as Oskar Schlemmer, Josef Albers, and other such Bauhaus alumni.  So far it's graced surprising places throughout the house every day this year (the most surprising being inside one of my shoes...brilliant).  I guess it's a kind of New Year's resolution, but we'll see how long it lasts.  You know how fickle artists can be.
Posted by Unknown