Does anyone else consistently have Back to Life by Soul II Soul on repeat in their heads after a vacation ends and school, work and, well, reality begins again?

I recently returned from a trip with friends, which we took to celebrate my dear friend Nayt's 40th birthday. I know what you're thinking: 'wait a minute, aren't you always talking about how you're broke and can't afford basic human comforts like new Converse and a non-stolen internet connection?' Yes, those things are still true, even more so than before, as a matter of fact . But sometimes when a friend you've had for 23 years says "hey, I'm giving you over six-months' notice and I want you to be there," you've just gotta make it happen. Sometimes those old, soul-deep connections are more important than making that last dentist payment on time.

So I did some penny-saving, some beans & rice eating, some creative Craigslisting (no, that is not a euphemism for offers of naughty massages. I just sold some stuff), and put off paying back some loans just a little bit longer. And I got some new Converse as a Christmas present, so that meant the ten bucks I'd been saving over the last year toward buying a pair could buy some pretzels on the plane! It's like the universe was smiling upon me...and wanted me to eat pretzels! Also, you'd be surprised how cheap lodging can be when you cram 12 people into a house meant for 8. We're creative folks, my friends and I.

The trip itself was pretty incredible, in that 'Oh, wow - I'm here with all (save one, hard as we tried to get her there) of my oldest friends, laughing, playing games, singing songs, taking unfortunate pictures' kind of way. It was really wonderful. This is a pretty great mix of people, so our late-night conversations and antics ranged from discussing whether man is inherently good or evil, to imitating wolves with under bites, collaborating on coming up with the perfect lead up to an existing punch line, to playing guitar and singing old Luna songs. I was in heaven. 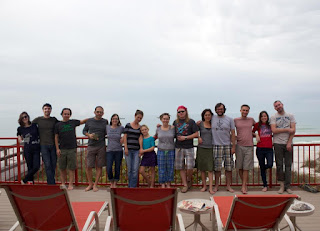 A strange thing happened when I came home, however. Usually when I return from spending time with these friends I get terribly depressed and very 'woe-is-me' because I miss them so goddamm much and my life here seems so shallow and pale in comparison. This time, however - this time I felt...alright. Pretty good, in fact. Instead of feeling the great loss of having left them all behind, I felt filled up and rejuvenated from the time spent with them. I felt really, really happy.

Another change was how excited I was to get my paws on my kids. I always miss them when they're gone, or I'm gone - even if it's just their time with dad. But if I remember correctly, when I had an opportunity to go on a solo vacation in my old life, coming back was like dragging cement blocks around my ankles and wearing a necklace made of bricks. The thought of all that lay ahead of me versus all that I'd just come from seemed daunting, at best. I guess that didn't have all that much to do with my kids, in hindsight. 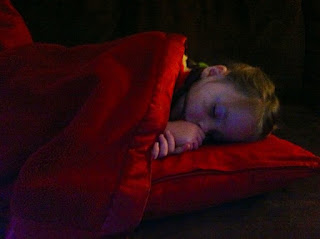 I was so pleased to be in the company of those little snuggle-bugs again! We played games and brainstormed a menu for our week, grocery shopped, came home just in time to beat the rain. After trying a new soup recipe for lunch (yum!), we watched a few episodes of Pepe le Pew (I am ze locksmith of love, no? Ha! Love that guy), then turned off the TV to bake oatmeal raisin cookies. Jonah disappeared into their room to read, Evie quickly left her post as baking apprentice and, after the first batch was in the oven, I found her afternoon-sleeping on the couch. I was overcome with the unexpected sweetness of it all.

It's good to be home.
Posted by Amanda Janik