Why You're Always Failing as a Father

I write this blog, you see, and in it I like to offer up my experiences as a parent.  I do this partly to keep my family and friends up-to-date on what's going on in our lives, but mainly I do it for therapeutic reasons. Why would I need therapy you ask?  As I sit here typing I can smell poo.  I know it's in the vicinity but I checked the places you'd expect to find it to no avail.  So I gave up looking.  That's why.

Naturally I like to read about the experiences of others in similar situations.  I recently read an article in the New York Times called "I Hate Being Called a Good Dad" by Matt Villano.  He points out that calling someone a "good dad" is like calling a black person "eloquent".  Why would you presume we're not?!  It's a hilarious account and a good point but I have to admit I'll take the "good dad" compliment and run with it. 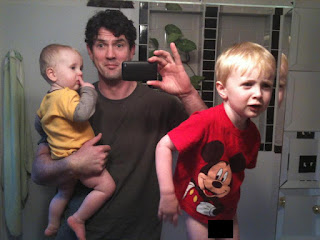 Why am I not put off by someone seeing me hold my son's hand while I walk down the street who feels compelled to pull over to openly admire my skills as a father? (Yes, that happened)  Probably because the only reason I'm out in public with him is to get just that kind of attention.

What kind of dad would need a stranger's affirmation like that?  The kind of dad who polishes off and entire bottle of Syrah so his kids' books will be less painful to read, that's who!  Nice to meet you.

Just a few weeks ago I read another article in the Huffington Post called "Why You're Never Failing as a Mother" by Amy Morrison.  It's a great article, but note the gender specific title.  There's a reason for that.

Men make crappy parents.  We really shouldn't be left alone with our kids.  Maybe it's in our nature.  I mean, we're supposed to be out killing, not 'caring', right?  At our best (i.e. after a few beers) we're a blast!  We'll act like idiots, roll in the dirt, build forts, do the voices when we read, and teach the fine art of the well-timed finger pull.  At our worst (i.e. anytime no one is watching) we do just the absolute minimum to keep them alive and not completely miserable.  For example, since I'm obviously really busy right now, and it's my day alone with the boys, I went so far as to put on a video and kick over their toy box.  In an hour I may or may not "make lunch".

It may not be fair for me to generalize but it's my blog, so I'll do what I want.  Now if you'll excuse me the screaming is starting to sound kind of "hungry".  I've got some cheese to cut.
Posted by Unknown