The Biggest Asshole in Berkeley

Last night I drove to Berkeley with Paulie and my dad, who is visiting from Michigan. I'd been invited to read at an event called Lyrics & Dirges, which takes place at Pegasus Books on Shattuck. The organizer, Rad Dad founder Tomas Moniz, had invited me with a small amount of notice, when someone else he'd lined up dropped out. I was excited because I love getting up in front of people, reading, and this would be a rare opportunity to read something other than my old diaries.

When I saw that the theme for the evening was Radicals, Dreamers and Freaks, I got a little nervous. I guess I wouldn't call myself very Radical, Dreamy or Freakish in any of the 'Berkeley' ways - like, I don't channel crystal energy into my chakras and dance inside sidewalk drum circles. I don't protest very often or make much of a point to piss off The Man. I don't color, pierce, impale, wildly dress or otherwise tamper with my very average looking body.

I asked Tomas if it was okay that the material I had didn't fit in with the theme. He said "of course! Just have fun and make us smile, or laugh, or cry." Okay, no problem! I've never had any problem getting the laughs. Although, in hindsight I can see that I might be getting laughs because those I'm reading for have a sense of humor.

The second person read from a book he'd co-published about poor and working-class radicals in the 60's and 70's who'd organized political struggles against racism and inequality. It was powerful and insightful work, which gave me pause for a minute. I thought, "hm, well this is pretty serious stuff. But hey, whatever. Berkeley."

Then a lovely young Chicana got up and read about migrating to the Bay Area, living in Oakland, racial profiling, and other relevant, serious issues that she was involved in. Her work was beautifully written and optimistic, and full of words I didn't recognize because I don't speak even a tiny bit of Spanish.

By this time Paul was looking over at me sympathetically, squeezing my leg in support. See, the piece I'd chosen to read was a light-hearted one that takes place in a Mexican restaurant, and which basically highlights what a dick I am. I think it's funny.

Scratch that - I thought it was funny.

The next reader spoke about the injustices currently being acted out against the Romani people, and passionately acted out a scene about unsuccessfully attempting to assassinate the evil dictator Mussolini. While I enjoyed his performance very much, I spent a lot of time during it wondering if anyone would notice if I ran away as fast as I could. The damn old woman with her damn walker next to me prevented this escape, though.

After Tomas enthusiastically introduced me with "well, now it's time for a change of pace!" and it was finally my turn to stand at the podium, I looked out at the audience and noticed several bike helmets tucked under chairs. Oh yeah, I remembered. Berkeley is suuuuuuper into bicycling. Heh.

I read about how much I love margaritas and tortilla soup. How inconvenienced I felt when a bicyclist got hit by a car and I had to leave my margarita and soup. I failed oh so horribly at the Mexican accents of the restaurant employees in my story that, in written form work just fine but when reading them out loud, sound downright offensive.

I have literally never felt my heart pound so hard. I tried my old trick of laughing at myself in hopes of encouraging the crowd to lighten the fuck up, but they weren't really having it. When I dared to look out at the crowd, I saw people shift uncomfortably in their seats, or whispering to each other and smirking. The only laughter I heard was coming from Paulie, and I knew it was mostly caused by recognizing how awkward the whole situation was.

Afterward I attempted to 'mingle' as encouraged by Tomas. My 'mingling' consisted mainly of me hiding by the bathroom for a while, then trying to keep a straight face while telling Paulie that I had basically picked the worst possible story to read, and him trying to convince me that it hadn't been that bad.

Finally we left and I was able to take a deep breath. "That. Was. The. WORST!" I laughed in horror. Paulie and my dad did not disagree. (Although, being my dad, he told me that my story was his favorite - thanks dad!)

As we crossed the street I did a brief re-cap: "let's see, I've got the fact that I admit that I feel a margarita is more important than a human life, I'm in a huge bicycle-loving town talking about a bike accident I don't care about, I've got fantasies about forcing someone to have sex with me, and I've got a mangled Mexican accent in a cultural town and with at least one very proud Chicana in front of me...yeah. Amanda for the win."

Paulie, ever my number one fan, tried to console me. "You know, if you think about it, your piece was actually the most radical story of the whole night, because it goes against everything that Berkeley stands for."

That cheered me up. But, I don't take myself too seriously, and I have a sense of humor, so I guess I'm easily cheered. Even if I am the biggest asshole in Berkeley. 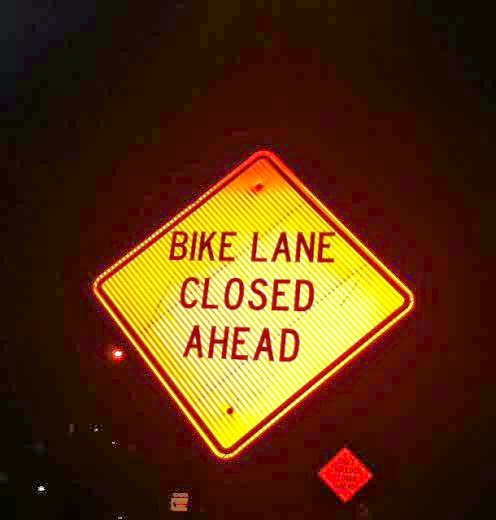