I'm standing here at the counter at Sprout, and I'm getting a tad disgruntled because Google is not being my friend right now.

I carry a great t-shirt line called Rock n' Roll babies, which has fun images on organic cotton shirts, all designed and printed in San Francisco. Sadly, they've gone out of business.

They had one t-shirt in particular that I was eager to re-order. My customers always love it, and I've been proud to carry it in my shop where I encourage fuzzy gender role definition and have happily sold nail polish to boys and toy tool sets to girls, because, um, who cares? The shirt was pink and read: "Boys Can Wear Pink."

In doing a quick search for an alternative, I found an underwhelming selection, and far too many blogs and discussions about whether its even 'okay' for people to dress their sons in pink in the first place. Needless to say, it ruffled my feathers. Why is this even a discussion in 2014? Sure, that's mostly a rhetorical question because while I am lucky enough to live my life in an accepting way and surround myself with other open-minded, tolerant people who care more about their children's happiness and emotional well-being than in carrying forward archaic and ill-advised 'rules' that someone told them in preschool, I realize that there are a lot of people outside my bubble who don't feel the same.

The first story to come up in my search for more pink shirts was called "Should Little Boys Wear Pink?" to which I say, duh, why not? However, the blog is very Catholic-y, so frankly it's what I would expect to find there. In it, the author sites another blog post which she disagrees with, and while I also wasn't surprised to find that one at Salon.com, I was shocked and saddened by the uber-hateful, angry comments that poor guy got. Yikes.

I'd like the authors of both to know that they seem like very nice people and I respect that we are all entitled to our own opinions. The fact that we've created this platform with which to express our thoughts shows that we are confident in those opinions, regardless of whether others agree or not.

One thing from that first post I did not agree with, among others, was this statement: "Any dad who wonders if his sons are naturally more active and aggressive creatures than their sisters should spend an afternoon watching them play. Here’s a hint: There won’t be many tea parties."

First of all, Paulie's son spent countless hours as a child playing with and intricately arranging his tea set. I'd venture to say it was his most prized toy. I've met roughly a bajillion little boys in my day between my business and, well, my life, so I can say with confidence that he's not the only boy I know who loves himself a play cuppa. So seriously, with that statement, puhlease. Perhaps you're not seeing it because boys in your circle are being told they can't. Here's a hint: if you stand back and give your children a little freedom for creativity, they'll play with whatever they damn well please, and be better adjusted, more confident, compassionate adults for it.

Second of all, if you haven't already met them, allow me to introduce you to my children:


My daughter is the first one to reach the top of the gravel pile. She speaks her mind, fights for who and what she loves, and Takes. No. Shit. She dresses herself in anything from what can traditionally be described as 'girly', to her brother's beloved hand-me-downs because, again, who cares? And nobody gives her a hard time when they see her wielding a hammer or wearing blue cargo shorts.

My son's most long-lasting favorite color was purple. He played dress-up almost 24/7 using scarves and other crap he found around the house - sometimes he was a pirate, sometimes a mermaid, sometimes a superhero. (Yes, I said mermaid. If any of you have a problem with the fact that my son sometimes pretended he was a mermaid, I will NOT threaten to kick you in the throat - because I am not that agile. Also, I am a peaceful and loving person and I don't have time for your ridiculous noise). His favorite shirt, until it fell apart, was the afore-mentioned Boys Can Wear Pink t-shirt. So when I saw one of the comments found on the above linked blog, I laughed out loud:


"This past weekend, hubby took the family out to dinner at a local pizza parlor.  While seated, hubby sees this a little boy, approximately 10 yrs. old wearing a pink shirt emblazoned with:  “Tough enough to wear pink!”
Hubby, turns to his 4 sons and says:  “Not on my watch!  Just try it…that boy didn’t pick out that shirt and neither did his dad.  His mom bought that.  Shame on her!”
God bless real men."

So, let me get this straight - your husband saw a kid in a public place (i.e. none of his business) wearing a shirt he didn't like (not his kid, none of his business) and was so put-off by said shirt (because of it's...color, ahem) that he threatened his own children should they dare to wear that color in his household. He drove his point home by not only shaming the child, but also the child's mother (based on his own assumptions), in front of his sons. And you, wife of hubby, are proud of this behavior and the lessons it is teaching your four sons in what it means to be a 'real man'.

Wow. Thank both your god and mine that I am not in your family.

What are we teaching our boys when we tell them they can't? They can't play with tea sets, can't dress up as feminine characters or even animals - ladybugs, bunnies, kittens - any of those okay? No? Okay then, moving on. They can't wear a specific color. Can I just go out on a limb here and be the one to ask WHY? Why are you so threatened by the idea of your son doing any of the above? Because guess what: all of the reasons you're coming up with right now? Those are 100% about you, and your insecurities. Maybe try keeping them to yourself.

Kids are born liking what they like. Period. Hey, one of my six brothers ran around in a purple sparkly one-piece bathing suit for an entire summer as a kid and sews for a living now, and he's a confident, well-adjusted, totally hetero dude - and if he wasn't, who cares? Another one did the majority of the cooking and childcare in our household and grew up to be a super-tough Marine. They turned out fine, you guys. Settle down.

When my son walked into my shop and first saw the Boys Can Wear Pink t-shirt, he eagerly asked if he could have one. I could see it in his eyes: he was feeling validated for his love of all colors, despite recently being told by some Kindergarten peers that some of those colors weren't allowed in the world of boys. How sad.

My kids know that I don't just hand out stuff from the shop to them willy-nilly. If they want things badly enough, they earn it through their behavior and by doing chores and helping around the store. That kid was hell-bent on getting himself the t-shirt and, once earned, he wore it as often as possible.


On his first day of first grade he walked into the kitchen where I was cooking breakfast. As usual, he'd gotten himself dressed and he was beaming, proudly wearing his favorite shirt. He said "I'm going to wear my 'Boys Can Wear Pink' shirt today, so everyone at school knows it's okay for boys to wear pink!" He was so excited to to be the self-appointed bearer of a positive message to others. At this point in his young life he was not unaware or unaffected by the dark scowling under-element of insecure judgement floating around out there.

But he did want to change it. I was so freaking proud.


His decision didn't hurt anyone. He wasn't promoting violence, or hatred. He was just wearing a shirt that he really liked and told him - along with his parents, family, friends, neighbors, community - that he could wear it, if that is what he wanted to wear. So, yeah, what's the big deal, yo?

To the 'real man' dad referred to in italics above - what if that kid's dad did buy his son the pink shirt? What then? Or if his mom bought it, maybe it was at his request - how is that hurting you? Because what I'm seeing here is that the kid in pink has a much higher level of social intelligence and love of humankind than you -- you, the God-fearing Christian who chooses to threaten his sons should they try wearing a color you don't approve of -- could ever dream of. Yes: a child is more evolved than you. Congratulations.

Oh, and to anyone who might suggest that I, as his mother, am responsible for my son feeling comfortable wearing pink as a young kid but he would 'know better' by now, sorry to tell you this but he still wears whatever the heck he wants to, and he couldn't give a hoot about what you think, so go find some other completely undeserving person to judge and bully. You are disappointingly adept at it.

On another note - does anyone want to make a cool new 'Boys Can Wear Pink' t-shirt for my shop? I know a couple of kids who'd love one. 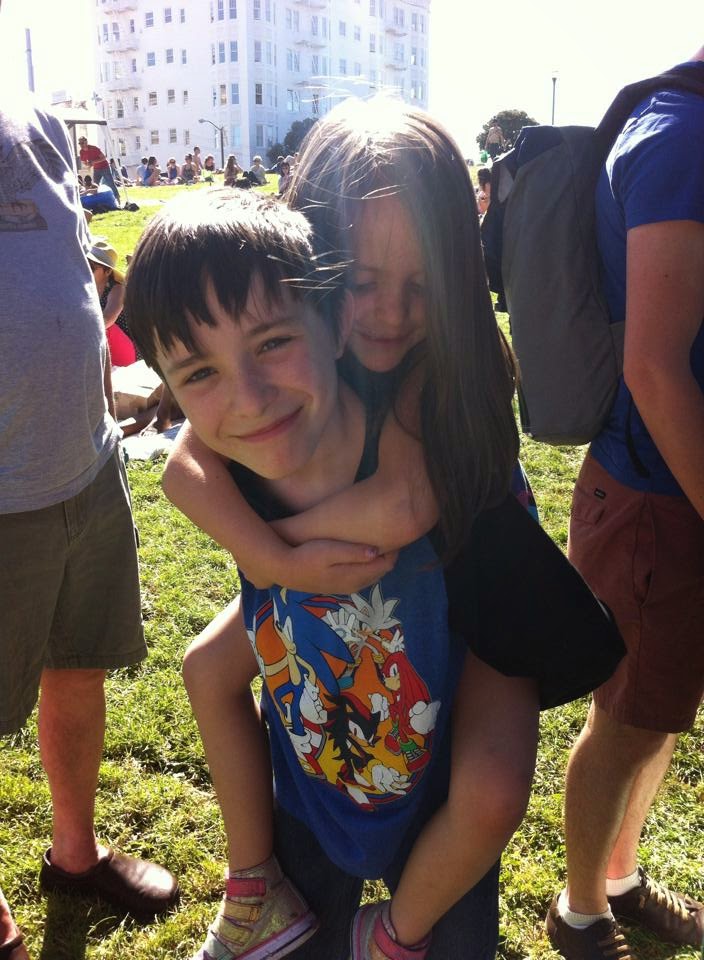