I guess I just wasn't prepared. I'd forgotten that I have the emotional fortitude of a hungry wet kitten. 'Kindergarten' is a funny word. It means 'garden of children' in German. If, in fact, I had taken Liam to school and they had buried him in dirt up to his neck while some enormous FRAU in a dirndl sprinkled water on his head, I would have been no more traumatized than I was last Wednesday. Go me.

The team that worked on his IEP during preschool had sifted through a number of programs in three different school districts and had sold me on the special education program at Mattie Washburn Elementary. It even sounded cute, and in fact the place is pretty adorable. Erin was dropping Liam off for his first day and I'd planned to get away from work for a bit that morning to see him off and meet his teacher. 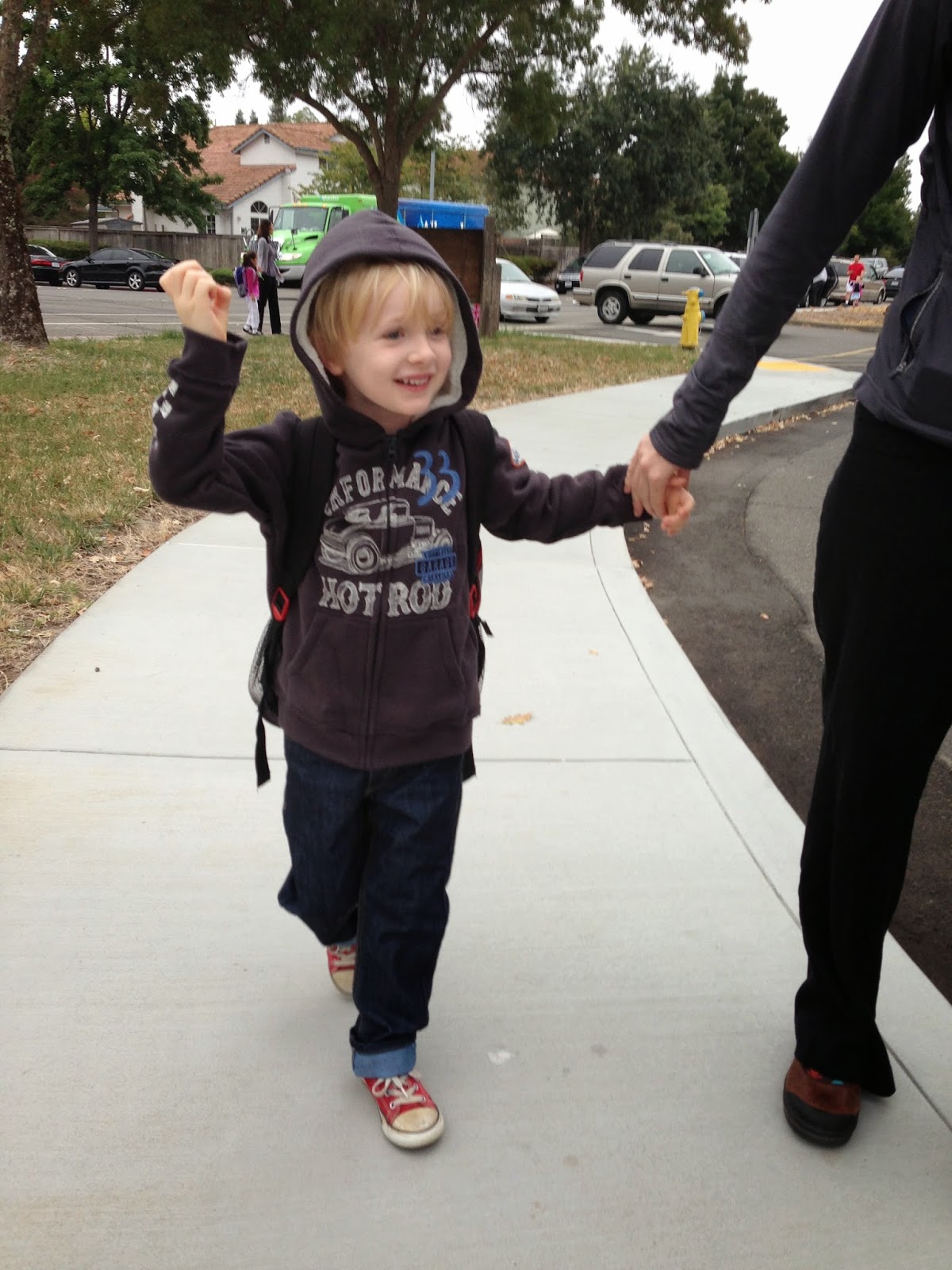 I showed up early to find out where his classroom was and to case the joint. As soon as Liam got out of the car he was thrilled. He ran up to me "Hi daddy!" and closed one eye and pointed his finger at the campus behind me and said "SCHOOL!"

Erin and I walked him to his classroom through the sea of harried parents. The room was a small portable with bare grey walls and sheets draped over all the bookshelves. The teacher seemed nice enough but it was hard to get a good read on her while she was wrestling a 7-year-old boy who was about her size and having a violent screaming tantrum. There was an aide tending to the three other kids in Liam's class who were huddled near the classroom door, not sharing Liam's enthusiasm for school. Liam, meanwhile, had found some blocks and action figures hidden behind one of the sheets and couldn't have been happier.

I had only done the first day of school with Liam once before when he started pre-school. That environment was cozy and sweet, with finger paints, toy kitchens, macaroni art, and shy little kids clinging to legs. This felt like an institution.

I get it though. The environment is designed not to distract and of course these kids are going to have some anxiety, but this unexpected scene was making me want to do something inappropriate. I wanted to grab Liam and bolt, but that probably would have ruined his fun. 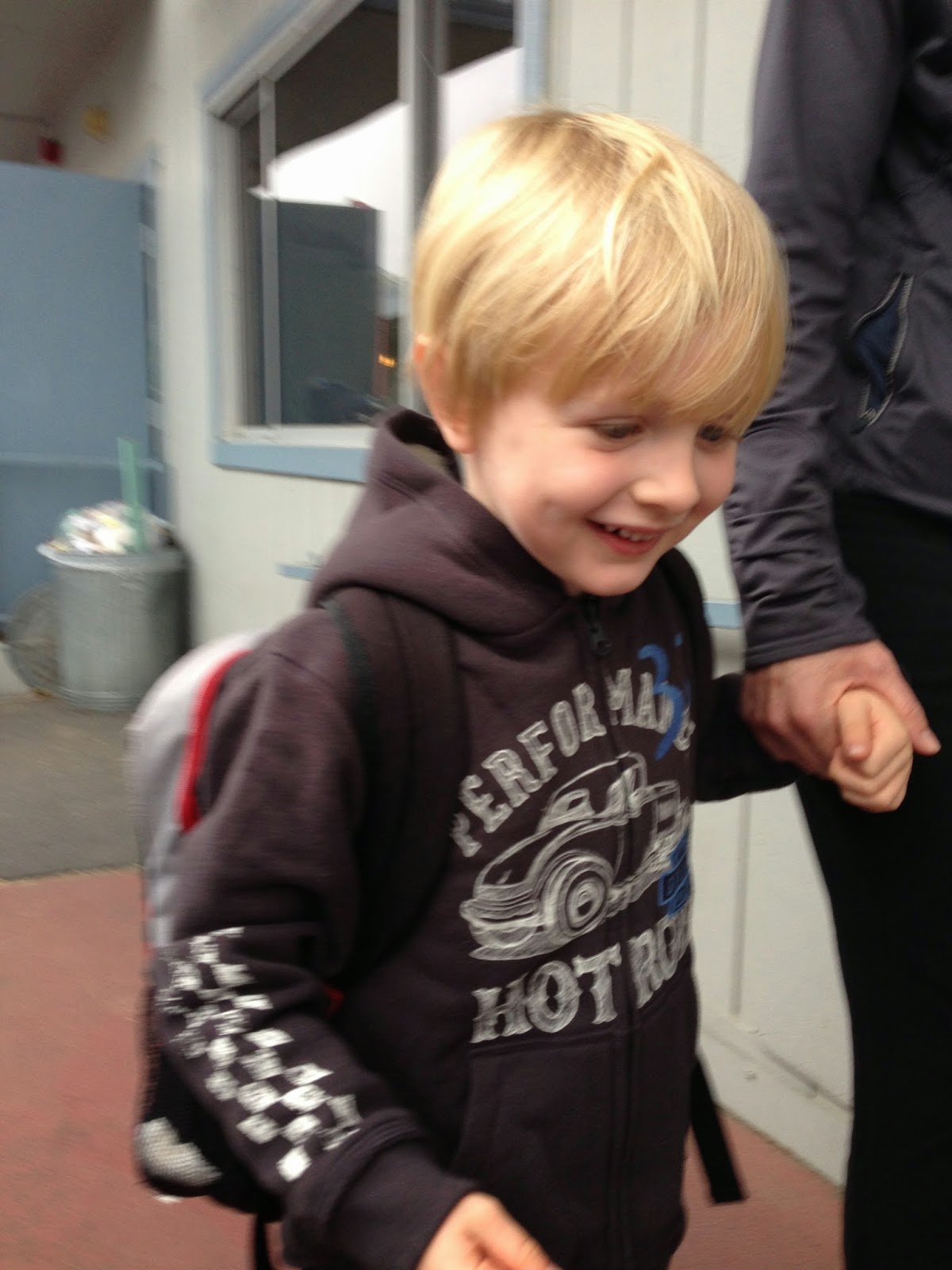 I held it together long enough to give him way too firm of a hug and then forced myself to leave. I made it about halfway to the car before looking back and seeing Liam line up outside with his new classmates. He was watching Erin and I go, not with sadness or fear, just with curiosity. Right about then is when I turned into something that made all the other parents in the parking lot uncomfortable; a 6'8" puddle. Luckily Erin was used to it.

I had to get a grip obviously. It was too early in the morning to start drinking so I dashed to work and wrote Liam's teacher an email:


I'm Liam's father and I just wanted to say it was nice to briefly meet you this morning. I wanted to touch bases with you and let you know this is my email and I can be reached here any time so please don't ever hesitate to contact me for any reason.


I'm impressed with Mattie Washburn and everything the school has to offer and I'm grateful such programs exist to help my son thrive. I have no doubt everyone involved with Liam is doing all they can to help him succeed. I'll be curious to learn all I can about his schedule and what his education there "looks like" as I'm eager to help assure that his setting is the "least restrictive environment" for him.


Of course it's just the beginning and no doubt this is a very hectic time but I'd really like to know when, generally, we might meet to evaluate his program and the goals in his IEP.


Thank you and I hope your first day went well.

There were a few less level-headed drafts. Not too bad though, eh? Believe it or not she's since sent me half a dozen or so emails that have comforted me beyond measure. She's clearly a pro at handling tantrums from parents as well as children. We're going to 'reassess' in six weeks and I've stopped breathing into a paper bag...for now.
Posted by Unknown