I just got back last night from a week at Berkeley Tuolumne Family Camp.  I've always struggled to explain to people exactly what "family camp" is but I've settled on "It's like M*A*S*H*....but with way more kids and way less Korean War".  It's got cabins that are sort of 'tent-like', a dining hall, plus bathrooms and other such ameneties, and it's just seven miles from the entrance to Yosemite.  For some reason I get the same reaction out of everyone when I describe family camp and that's "oh......so it's not real camping"  Yeah it's fake camping asshole! Whatever!! This shit is ROUGH! The cell coverage is dodgy, power outlets are limited, and the nori they used on sushi night was grocery-store-grade AT BEST.

My family has been going there forever.  My grandparents took my mother there when she was a kid, my mother and all her college friends took all of their kids, and now all of us third generation kids are taking our kids.  By the next generation they'll pretty much have to shut the place down for us.  What's the appeal?  Particularly for someone like me whose out-door activities don't go beyond drinking in the backyard?  The place is basically a means to have a week-long bender while other people look after your kids.....bliss. 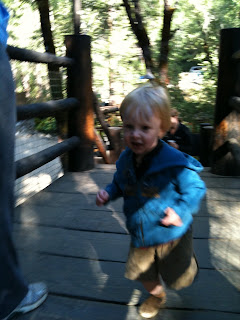 When I was a child it was unsupervised heaven.  For Liam, this past week, it was a place to run....constantly...at full speed....during every waking moment.  I hadn't anticipated this.  If I had I would have trained or at least requested a cabin surrounded by some kind of natural barriers or something.  He woke up early every morning screaming to be taken out of his crib.  Once his feet touched the floor he darted to the little 'baby barricade' the staff had installed on our cabin and wailed on it like the place was on fire.  Once freed it was run to the river, to the cliff, into the campfire, into other cabins, up a tree, under a dumpster, into a bear cave, go go go go GO!!  By day two the camp nurse was escorting my mother from the dining hall to be treated for severe dehydration (she had watched him for us that morning).  By mid-week I'd developed a severe limp (probably psychosomatic) and Erin, at 7-months-pregnant, was googling ways to increase the odds of having a girl.  Incredibly he was able to sustain this unrelenting fireball of energy without eating?!  Mealtime was ridiculous.  The dining hall served three starchy meaty cheesy meals a day but feeding him was like trying to groom a feral cat.  Of course all of this was just fine because I'd never seen him happier.  That's the beauty I guess of going to a place where you get to do exactly what you want to for a week...even if all you want to do is run.  For me personally all I wanted to do was see my little man have as much fun as I used to and even though I'm exhausted, sore, bug-bitten, profoundly constipated, and have a three inch gash on my face from feral boy's tree sharpened fingernails, it all ended way too soon.
Posted by Unknown