I've recently entered the world of dating after taking a 12 year, 7 month hiatus. Things have changed a little bit. For example, now that I'm over 30, apparently it is my responsibility to Make The First Move. In my day, this phrase meant perhaps approaching a guy and saying "hey..." or even, after spending some time working through the niceties and other bullshit, looking at him in a certain way which says "I would not punch you if you tried to kiss me." 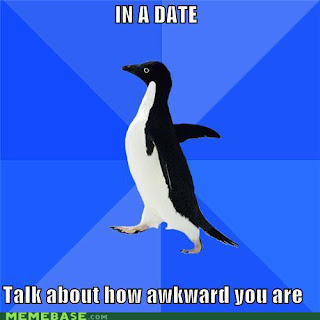 I am in general socially awkward around men who are not my friends, unless I'm terribly drunk, and then I'm just loud and inappropriate. (Side note - turns out I am just as awkward around women. Just ask the lesbian I cornered at a party last weekend. "So should I have sex with a woman? Would that be, like, awesome or something? I mean, I like boobs...I just don't think I could eat pie." Yes, I'm equally classy around both genders)

To appease those in my life that are sick of waiting to live vicariously through my new singledom, I've been making a concerted effort to fight my "no, thank you" instincts when someone of the opposite sex asks me if I'd like to, say, go for a walk.


Surprisingly, I've found that my married male friends are particularly interested in my love life. When I say "love life," I mean that they pretty much just want me to get laid. They are very concerned about me, and in fact I have been ambushed no less than three times by the same husband-of-a-friend, with men he considers suitable prospects. As far as I can tell, the only qualification he looks for is the fact that they are men - as proven after said Man leaves and I say "what the fuck? Why are you always ambushing me like that?!" and husband-of-friend says "what? He's a guy, he's breathing, you totally could've gotten laid just now!" With the 20-year-old high-on-coke running fanatic? Or the 50-year-old Republican hockey player with the buzz cut and the football ring? Really? Hm.


Likewise, Mike has taken a keen interest in my dating life, and requires a play-by-play of my fumbled attempts at normalcy so that he can then mock me and tell me what an idiot I am. He loves to take an entire, detail-rich story and sum it up as such: "so...he's homeless?" or "who borrows money from a single mom for a garage sale?" or "oh my loser, Dammit Amanda!" His advice is to find myself a Jay Z. Not having the faintest idea what this meant, I googled Jay Z, and I think Mike is suggesting I date a super-rich black guy, which I will go out and do right now. Because there's plenty of those in Santa Rosa.
Posted by Amanda Janik