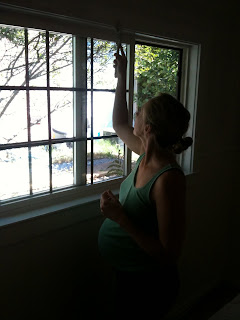 It's that time.  Time to kick out the squatters (sorry Kat), bust out the zero VOC paint, and get ready for the second coming (pun intended).  Erin is due the first week of October which is in a mere SIX WEEKS!  We just spent the entire weekend prepping and painting our guest room, not for the new baby mind you, but for Liam.  We figure it's the least we could do before we serve him his eviction notice from the one and only sanctuary he's known since leaving the womb.  Poor little guy, it's gonna be rough.  But to help him ease into this transition we took advantage of this laborious weekend and started getting him properly ready for the impending neglect.  We couldn't have him anywhere near the painting project**, not unless we were going with some kind of Jackson Pollock motif, so we locked him in the living room and alternated between Pixar films and Yo Gabba Gabba.  That way he was able to get familiar with some of his new 'friends'.  Sure he was robbed of his parents affection but he did learn that carrots want to go to the party in his tummy.....yummy yummy.

This is Liam's first sibling.  A great leap into the unknown.  Will he love his new brother/sister (no, we don't know yet) or will he be a holy terror?  We'll know soon enough.  I'm encouraged by how sweet Liam seems to be with other people's babies.  He might have an innate gift for caring after small creatures but then again last week I caught myself shouting "NO Liam, kitty's don't like army men in their butts!"  Maybe that was presumptuous though, he might know something I don't.  Either way I'm determined to make the new baby thing painless for Liam.  I really am.  But like all things regarding babies, I have no clue what to expect.  I don't want him to feel neglected, of course.  I hate to think of anything causing him pain so I figure I'll be on "Liam duty" and Erin gets the newborn, right?  This could totally work!  Sure, we've never been able to handle one on our own but hey "necessity is the mother of invention" or whatever, isn't it?  Was there a father of invention?  Did invention have a toddler older brother?  Yikes. 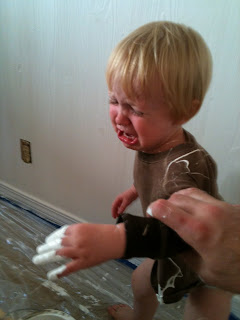 **Liam did get into the paint.  He stuck his hand in the can while I was having a pee and Erin was carelessly roasting beets.  Naturally he tried to shake the paint off which caused some to get in his eyes but not to worry.  He's just fine all thanks to his fast-acting father who tended to his medical needs IMMEDIATELY after taking this picture.
Posted by Unknown