Important Notice: I Missed My Kids 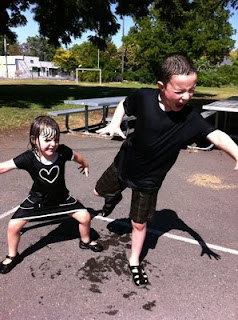 My kids returned from their vacation at Grammy and Grandad's house in Utah last night, and I have to say, they rock (as shown in this completely irrelevant picture of them, being soaking wet rock stars. Notice how Evie looks like Jack White).


The first thing Evie said when she got out of her dad's car after ten days away and a 15-hour drive was "I threw up my McDonalds breakfast!" Ha! Nothing about this statement surprised me. If you're going to undo years and years of non-McDonalds road trips, guess what's going to happen? Barf - that's what. I realize that certain people think its ridiculous and perhaps snobby and elitist of me to have insisted for all these years that my kids remain fast-food free, but hey, they don't vomit on my watch. Just sayin'.


Granted, the dinner I served them upon their return was made up almost entirely of frozen food - egg rolls and fried rice - with some fresh but mushily cooked and absolutely flavorless zucchini and yellow squash on the side. But still. I have fresh corn, green beans and bell peppers that will make an incredible dinner...maybe tomorrow.


During last night's crappy dinner, though, we had a guest that I hadn't planned on having, and so I didn't get the chance to warn (read: threaten) the kids about being on their best behavior. While I was nervous that they were going to go post-road-trip-apeshit, they were actually very polite, charming and engaging. After dinner there were games and dancing - Evie and I did our usual rendition of Princess Mosh Pit - I sang songs and read books and eventually the kids dropped open-mouthed and drooling into their beds. I quickly followed suit.


Having my Evie Alarm Clock this morning was no less of a killjoy than any other morning, but after eight full minutes of her high-pitched whining for breakfast, she managed to remember the whole 'ask politely' thing that I tend to think is important.

She cupped my face in her sticky little hands, kissed my nose for a bit longer and more passionately than neccesary, and cooed "Pleeeeease pretty-face mama, can you please make me breakfast?" She blinked her eyes very slowly in a 'look at me, I'm soooooooo sweet and adorable that you'll never be able to refuse me food' kind of way. And just this once, she was completely right.
Posted by Amanda Janik