So, this is cool - recently I met with the producers of Mortified. I read to them from my old diaries, they liked what they heard, so I'm going to be in the show. While this in and of itself is kind of a 'dream come true' experience for me, with it came a shocking and terribly depressing discovery:

My love life hasn't changed much since I was in Middle School.

"Oh Amanda," you're thinking, "stop being so self-deprecating all the time, silly! You're greeaaaaat!"  Or maybe you're thinking "she's exaggerating for the sake of the blog. Middle School? Ha! She's funny..."

Allow me to show you some excerpts from my Middle School and then Current diaries. Then you'll get it:

Sept 29th, 1989
Well, Matt gave me his ring. I realize now I don’t like him. I have to give it back, but I just can’t. I know I should, I just don’t wanna hurt him. I don’t think it would though, its prolly all just a game to him.
I love to roller skate. I love to roller skate fast!!
I think I like Brian. 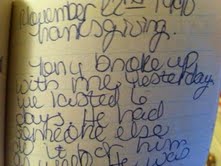 November 22nd, 1990 - Thanksgiving
Tony broke up with me yesterday. We lasted 6 days.


*****
So, as you can see, I really wanted a boyfriend. I also thought it would be cool to have a boyfriend for more than a few days, or weeks if I was lucky. Yeah, I eventually had a boyfriend for 2 years. I also had a husband for 10 years. But now, things have kind of come...full circle.

After taking about 6 months off from the whole "men" thing, I decided I was ready to dip my toe into the dating pool. And woo! Boy did I get some swimmin' done! I enjoyed dating, but it got tiresome very quickly. When I finally decided to go the boyfriend route, well...here, read for yourself:


*****
Sept 8th, 2011
I find myself only dating (guy who has specifically asked to not be mentioned in my blog), and actually really liking it. He's very chill and easy to be around, very respectful, funny, makes me laugh, etc. I like him very much.

October 1st, 2011
(Guy who has specifically asked to not be mentioned in my blog) broke up with me, via email - (basically this generation's version of a note handed to you while passing each other in the hallway)

I got over that, I think. And then, the day after I told Mike that I was "off men" for a while, this HOT guy asked me out. How could I say no to someone who looks like a freaking Ken doll and seems legitimately attracted to me, especially when I hadn't washed my hair that day and had six holes in my t-shirt? We went out a few times, had some cuh-razy awesome time together, and one night after some drinks he - much to my surprise - asked me to be his girlfriend. It was adorable. I was pretty drunk, so I said yes. A couple of days later, after some thought, I tried to give him an out and brought it up in an adult, 'let's check-in' conversation. He said that No, he wasn't completely wasted at the time; Yes, he did in fact mean it; and then he assured me that this was happening.

He dumped me the next day. He was my boyfriend for three days.

Seriously, I didn't even have time to write about him in my Dating Diary!

So mark my words, fans: I am OFF MEN, at least until after the Holidays. Who wants to date during the Holidays? Not this girl! Don't even try, please, I'm begging you. I realize that as soon as I said I'd been dumped - again - my male fans and their friends started a texting brigade and were about to start lining up at my door. But really, just don't bother.

I have plenty of space in my journal for after the Holidays.
Posted by Amanda Janik