Having grown up in Michigan, land of "We Hate Foreign Cars," and being the rebel that I am I felt like I'd somehow arrived when I became the owner of a used 2002 Volkswagen Jetta Wagon. It fits a couple of kids, lots of other stuff, and has had its fair share of problems over the years.

Lately, it loves to break down whenever I am out of town. It only does this on the weekends, when there are no service stations open, therefore forcing me to have it towed back home. I can hang with the Salt of the Earth types, no problem, and in fact quite enjoy making small talk with tow truck drivers. But this is getting old.

The first time it happened, I was in Half Moon Bay over the 4th of July Holiday weekend. I tried to fix it myself - with duct tape. This without a doubt would have worked if it wasn't for my man-hands and that damn German engineering designed solely for people with hands the size of invisibility. 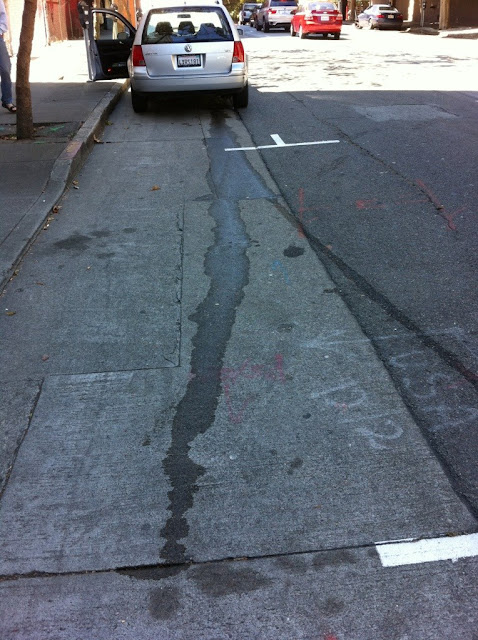 The next time it happened, I'd just picked up my dad from the airport in San Francisco, and we'd stopped by Slow Club where we enjoyed a delicious brunch. As we were heading home, my car died. See that trail of fluid running down the street? That's my coolant. After a few minutes in the tow truck, I said to my dad, "we really should have had more Bloody Mary's." He chuckled.

But I wasn't kidding.

The time after that, I was on my way to see Mortified, again in San Francisco. The same problem occurred as before, but this time I had to 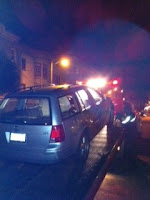 wait over three hours for a tow truck to arrive, which strangely I did not find amusing. Every time I called to check in, they would tell me that it would be arriving within 45 minutes, then 20 minutes, then 30 - 40 minutes, so I didn't bother leaving my spot. For what its worth, the people who live on Filbert Street off of Van Ness are very kind, concerned, helpful folks. And so pretty! Being a mild night, I learned that very short skirts and fuck-me heels are in fashion right now. I obviously had no idea. Another important lesson!

I was so, so grateful that I hadn't eaten dinner and so was forced to stock up on Corn Nuts and Tiger Bars from the nearby liquor store. Because, as the name would suggest, they also had liquor. 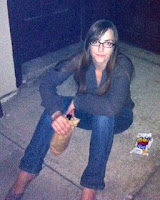 When the truck finally arrived, my driver was overly enthusiastic (aka high on crack), and it was soon clear that I had to cram into the cab of his truck along with his prison-tattooed girlfriend.

They were very nice people.

I finally got my sense of humor back when the driver decided to drive in the middle of two lanes - in a construction zone - declaring "they can wait!" to the angry, honking drivers behind him. Ha! Love that guy.

Its good I love him, too, because it looks like we'll be spending a lot of time together.
Posted by Amanda Janik