I can't Adam and Eve it!

So I have to admit I have a problem.  I think it's natural to celebrate one's heritage.  You should embrace your ancestry and the culture of your people, but it's important to not be a complete dork about it.  I can't help but giggle to myself every time I go to a taqueria and there's that picture of the Aztec warrior standing on the mountain top holding that unconscious chick in the white dress (am I racist?) or that cat at the Chinese restaurant giving the "Cat Power!" sign (am I super racist?).  I can't help it!  So dorky, right?  Well it turns out I'm no better. 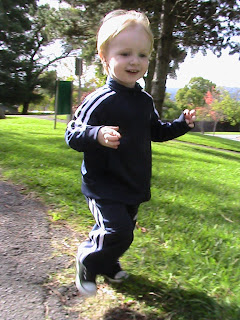 He looks like Blur!!  His name is Liam.  His brother's name is Finn.  Evidently I think we're British.  I mean look at him!  What's next, a little Christopher Robin schoolboy uniform?  How did it come to this?  Okay it's been in the making for a long time.  My favorite authors are Douglas Adams and J. K. Rowling and I'm obsessed with Monty Python and Dr. Who.  God, I'm not even a cool British wannabe like the people who wear Alexander McQueen and listen to Radiohead!  I'M SO LAME!  Why can't I just embrace my true American heritage? Why can't I stand country music?  Why can't I shoot animals?  Why can't I love Raymond like everyone else does?  Is there a support group for this kind of thing?!  Bah, I need a pint.
Posted by Unknown