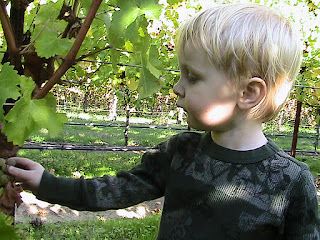 This has been an absolute crap year for grapes for EVERYONE.....except me.  Every year I have my doubts about whether or not I'll keep up my annual tradition of making kick-ass wine, but none more than this year.  First the summer was cold and nothing was ripening, then the rains came and everything rotted, then a baby came and I asked for a haircut for Christmas (and I probably won't get it).  So no way in HELL I'm making wine this year, right?  WRONG!

Right now I'm drinking the 2009 Syrah I made (literally right now) and it's really good.  That was Liam's birth year so I thought I would be the coolest dad by making a little something for him that he could drink when he's "old enough" so I bled off a few gallons of juice mid-fermentation and made port.  Obviously Finn's birth year deserves the same honor but being broke and surrounded by insipid rotten fruit didn't hold much promise....for the average mortal.  So a few days ago I decided to get up early with Liam and see what we could find.  I have a few grower friends who let me glean so I had options.  We headed down the Russian River Valley and on our first stop found some moldy grey Sauvignon Blanc.  Yes that's right...I'm making Château d'Yquem.  I don't know what it is about my luck.  I haven't had a hard life and I'm not a particularly good person, but this kind of shit happens to me all the time.  Maybe I'm over generalizing and it's just wine specific and the only attention I'm really getting is from Bacchus.  An old-timer I used to work with in this business assured me that every time I spilled wine it was a sacrifice to the wine god and I've done more than my share of honoring.  Liam has too for that matter. 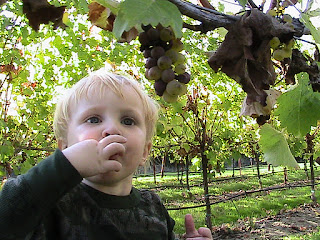 So we set to picking, with me doing the majority of the grunt work and Liam focusing on 'quality control'.  We got enough for two gallons which we will eventually bottle into splits and drink when Finn is older, or sell to pay for college. 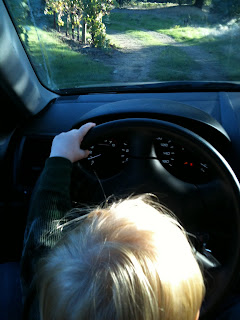 Of course Liam was properly compensated...
Posted by Unknown