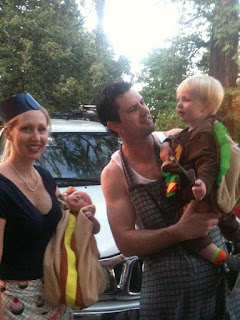 I was going to debate with Amanda over who was going to blog first about Halloween but since mine was the only one not X-rated I figure I win by default.  As usual we had big dreams for our family costume theme this year, but with a $30 total budget, my Han Solo pants are going to have to wait until next year.  Finn was easy, he got the hammy-down (that's how I used to think it was spelled) hot dog costume from Liam's first Halloween.  So from there we build.  Liam was a hamburger, Erin was a waitress, and I was a fry cook.  Every year the too-effing-cute-for-words city of Healdsburg shuts down the downtown square and all the businesses hand out candy to the kids.  Well, all but the one fancy jewelry store where they freaked-out at Liam once because he gently touched the stupid bird-feeder thing they keep out on the sidewalk.  They were handing out fucking school supplies or something.  Anybitch, Liam didn't bother with his usual nap that day.  I think he sensed he was going to dress up like a hamburger and get free candy so sleep was out of the question.  Instead he took off his poopy diaper and sat quietly in, from what I could tell, no fewer than seven different spots in his room during what would have usually been nap time.  Neat.

We descended upon the mayhem around 4:30.  By 7:00 we were done.  Really done.  Liam was on what is probably the 2-year-old equivalent of a bender.  No sleep and lots of chocolate.  He divided his time between full-out sprinting and collapsing into my arms.  I got a great workout.  Finn of course slept the entire time.  Erin....well Erin was just really hot. 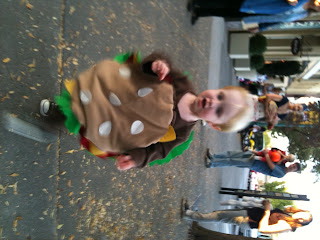 I don't know if there is anything cuter than little kids dressed up.  Getting to experience Halloween again through the child's perspective has bumped it back up into one of my top three favorite holidays.  As a teenager Halloween is all about 'scary'.  We used to go to an old mansion where my friend worked and watch The Exorcist and then play hide and seek.  I have no idea why I did that.  To this day I insist on taking the side of the bed farthest from the closet so that the monsters will get Erin first.  During our twenties Halloween became about sex.  That wasn't so bad.  But getting back to the roots has really made me love Halloween more than ever.  I already can't wait until next year when the force will definitely be with me.  Oh yes it will.
Posted by Unknown

Email ThisBlogThis!Share to TwitterShare to FacebookShare to Pinterest
Labels: Halloween