Without much news at home I hope you'll excuse this shameless holiday filler.  Liam has been nutburgers over everything holiday.  He's two and change now so this really is the first holiday season where he gets it.  It's a beautiful thing to witness.  It's difficult to describe what it's like to watch him during the holiday gatherings.  To say he's 'very very happy' doesn't quite do it but I think the picture below sums it up nicely.
That's a shot from the Healdsburg Holiday Party on the downtown square.  Sprinting has always been the way he best expresses his joy.  It's not just running though, it's more like a high energy dance that covers a great distance.  Shortly after the scene above a group of kids from the local theater dressed as the cast of Winnie the Pooh sang Christmas carols and Liam literally crapped his pants. Finn's holiday experience isn't quite as intense, but he did just start smiling this week.  With family and friends constantly doting on him I'd say he's not having such a bad time.  I haven't forgotten him at home yet I'm proud to say!  That might sound perverse but with all the travelling and casserole dish transportation (and wine) THINGS HAPPEN.  But so far that nagging "I'm forgetting something" voice hasn't been referring to anything more critical than a quart of buttermilk. 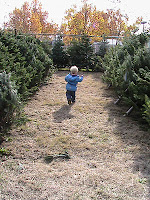 Today we kicked things up a notch as we went ahead and got our tree.  Now the household will be in a constant state of holiday cheer.  Certainly for Liam anyway, maybe not so much for Erin and I unless Liam suddenly learns that a tree covered in fragile glass 'toys' is not actually there for his smashing pleasure.   More to come.