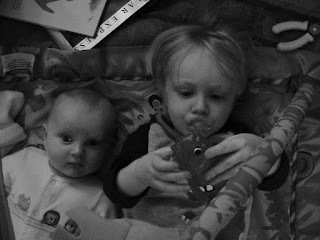 0800 hrs is the usual wake up time for General Stink (aka "Liam").  This morning it was announced in its customary fashion, long stretches of gibberish interjected with bouts of uproarious laughter.  It's like listening to one side of a conversation conducted in a Japanese-German hybrid language.  I'm not sure with whom he is speaking and suspect that he may "see dead people" but that's okay because apparently they're hilarious.

After I did the three things I need to do every morning I went in for a quick diaper change, 10 minute hug, and clothing selection.  This morning it was black jeans, a new shirt from Santa, fleece pullover, and the shoes with laces to intimidate the hell out of the other kids at "Roots and Shoots".......double knotted.  I noted that Liam has been taking out his "paci" before the shirt change and replacing it immediately afterward.  His self-preservation instincts are keen.

By 0820 hrs Major Poop (aka "Finn") announced his wakefulness with his customary blood curdling scream.  It's a good daily reminder that this is all far from over.  I found him soaked in urine.  His own I assume.  Apparently his diaper had failed during the night which was going to require a full body wipe down and sheet-change.  Curse it all.

With Christmas having passed only three weeks ago there are still a couple of toys in the house that hold General Stink's interest.  This lucky fact afforded me the chance to deal with the unscheduled crib snafu and still get breakfast on the table before 0900 hrs.  Today it was "nana", "egg", and "toes".  General Stink informed me this morning that his banana was "ye-yow".  I concurred.

Major Poop's clothing selection was dictated by the current abysmal state of our laundry.  Luckily there was still one set of jammies that fit.  Well, at least they did when I started putting them on.  I think he'd outgrown them by the time I'd reached the final snap.

By 0910 I had Major Poop in his car seat, General Stink finishing his egg and moving on to toast, and the car running.  I found that starting the car early not only converts it from an icy block to a cozy child-appropriate transport, it also forces me to look for my keys half an hour before I need them.

By 0915 the diaper bag was well-stocked and we were all wrapped, ready to go, and smelling like turds.  It's always fun to see just how fast I can strip, wipe, and repackage General Stink.  I think this morning I had it under a minute and performed it with an adept flare that would have intimidated a Benihana chef.  Banzai!!

By 0920 we were on the road.  By 0922 we were back at the house for the well-stocked diaper bag.  By 0923 back on the road.  I still got General Stink to Roots and Shoots by 0930 and set off for a victory trip to Starbucks though I did get it to go since I'd left Major Poop's defrosted ration of breast milk on the kitchen counter.

Monday has become my Day of Reckoning.  It's the one day a week that I'm off work and Erin isn't.  So I'm on my own.  I've found that having the mornings shot from a cannon like this creates a great rhythm throughout the day.  It's kind of an all out sprint with brief moments of stunned silence that really should be spent paying bills or cleaning up and not wasted blogging (oops).  By dinner time I'll be a mess.  Oh well, gotta dash....
Posted by Unknown