Night of the Living Dad

The other night I was staying up late drinking wine and watching Netflix.  It's my Sunday night routine since Erin works Mondays and I don't.  I'd decided it was time to find a new t.v. show to get addicted to and had heard some good things about 'The Walking Dead'.  After finishing the pilot episode I had to watch some 'Yo Gabba Gabba' reruns in order to purge the crippling melancholy that was suddenly crushing my soul.

If you haven't seen the show it was basically created by someone who was clearly fed up with the entertaining escapist fantasy zombie films on the market today and sought to portray the real horror, heartbreak, abject misery, and chilling isolation that goes along with the zombie apocalypse.

After breaking it down with D.J. Lance for a bit I was feeling better so I decided it was time for me to go night-night.  I got up and switched off the living room light not realizing that it was the last light on in the house.  I could have turned the light back on but that's just embarrassing so I chose to brave the 20 feet between me and the safety of my bedroom in total darkness.  This was difficult due to the fact that I was definitely surrounded by zombies. 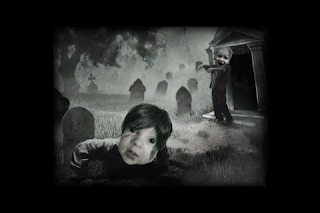 Well, maybe not surrounded, but there were at least a few directly behind me.  I didn't completely panic at first because I knew that zombies tend to be slow moving and I could easily outpace them with a brisk walk. The real panic set in when two more appeared in front me.....faces torn, oozing bile.  This caused me to sprint the last 10 feet down the hall, hands outstretched.

Erin had shut the bedroom door tight that night to keep out the sound of her smug husband watching t.v. for three straight hours after she had gone to bed.  This meant that instead of a quick "thump" and "whoosh" announcing my hasty entry into our bedroom, my wife was greeted by the sound of bones crunching into the door, followed by the scratching of panicked hands searching for the knob, and finally the heavy thump of a 6'8" 37-year-old man falling over his own feet trying to escape from imaginary zombies.

As a kid I had a very active imagination that kept me from sleeping at night.  I assumed this would eventually resolve itself when I got older.  You can't be a middle-aged father of young children who's afraid of monsters under the bed.  That doesn't happen!  I mean, what am I going to do when Erin goes on business trips?  Am I going to crawl in the bottom bunk with four-year-old Finn and six-year-old Liam because I had a bad dream and just hope that they don't ask questions?  Maybe I'll just let them watch "The Shining" and wait for them to show up in my room.  Awkwardness averted.

I guess the good news is when they have nightmares and need a cuddle, they'll have a sympathetic dad.  Plus I can teach them the tricks I've developed over the years to cope with irrational fear.  Tricks like getting married and always choosing the side of the bed furthest from the closet.  That night when I finally pulled myself together I was consoled by Erin's sweet words, "What the hell are you doing?!"  "Sorry", I sheepishly answered, while in my heart knowing that I'd be safe in bed with a wife who was evidently not undead and would still provide an adequate human shield.
Posted by Unknown