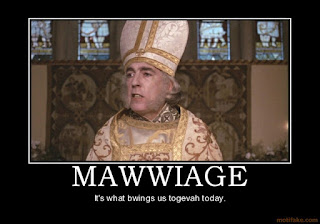 My stance on marriage over the last several years has been pretty consistent: Don't do it. Young lovers? Great. Stay that way. Old Soul mates? Fantastic! I'm glad you found each other. Don't get married. I certainly don't ever intend to again.

Whenever I say this out loud, people get all flustered and say something along the lines of "well, come on now, Never Say Never!" which, by the look in their eyes, I'm pretty sure translates to "chin up, soldier, there's a rainbow just around the corner!"

No matter how much I try to convince people that this isn't a bitter, angry response to my own marriage ending, they just can't believe it. Sure, when my son tells me that his father and the girlfriend are going to get married, I laugh borderline maniacally and say (in my head) "good luck sister! Happy to pass that torch on to you, sucker!" But that's just out of amusement - not bitterness or anger. Pure amusement as I rub my palms together and think "I cannot wait to see how this plays out!"

I just really don't see the point of marriage anymore. You can love someone, live with someone, share your deep secrets, intimate details, inside jokes and whole goddam life with someone...without getting married. Is that piece of paper really necessary? Because I hate to break it to you, but sometimes this shit doesn't work out. And undoing that sweet little sunset ceremony under the trellis gazebo and the over-budget kick-ass party afterward is a huge pain in the ass. Huge! Now I'm not saying I discourage marriage for the simple possibility that things might not work out. I realize that's what my last sentence sounded like. Maybe a little. But really my point is you can have all the good and bad that comes with committing yourself to someone without being married.

So imagine my surprise when I got the happy news that my little brother Chris had proposed to his fabulously rad girlfriend Courtney, and I was SO EXCITED. I got weepy with joy. I  actually (almost) wept. Almost - I'm not exactly a hopeless romantic. But still, these two- come on! They've traveled the world together for the last 5 years, often by bicycle (aka, they're nuts and also my heroes). They've moved across this country several times. They've lived together in at least 3 different major cities, I think, and in many tents and spare bedrooms. If they can survive all of this and Chris still finds it in his heart to be total rockstar man and ask for Courtney's hand in marriage in front of a room full of people on bended knee, then christ, go for it kids!

The most fascinating and, I'll admit it - encouraging - thing about their announcement was my reaction to it. My absolute pure and instant crazy joy for them caught me off guard, and was very love-affirming for me. Who knew? I still believe in love! Yaaaaay! Sure I've had my fair share of letdowns in this department over the past year, and let's face it, I might have some more. I hope not, but we all hope that. Sometimes it happens, sometimes it doesn't. We often don't know which it will be, or when. Actually, we never do. And that's the gamble we take when we decide to say yes. Yes - to love, to marriage, to non-marriage, to any part of it that suits us.

Thank you Chris and Courtney. You gave me back my faith in love. Now please don't break up, that would totally suck and completely debunk my entire point. Also, no winter weddings, okay? When I drink too much and then get up to make an uninvited slurry emotional speech that I start crying in the middle of, I'd like it to be warm outside when I rush out to puke out the vegan reception dinner my body just doesn't know how to digest.

I love you guys.
Posted by Amanda Janik