Throughout my middle and high school years, and for a little bit into college, I kept a diary. Now I just collect cool-looking journals and write in them for about a week or two, at which point they are abandoned. For some reason, whenever I decide to start up again, it never occurs to me to just pick up an old one and continue in that. No. I have to buy a new one. And so it goes.

Journaling is a very private practice - the place where you record your innermost thoughts, such as "I HATE and am going to KILL my parents!!!! They wouldn't let me go to the High School football game so I can see my boyfriend! Just because I'm 14 and he's in the Military! They're so overprotective! I HATE THEM!!! I HOPE THEY DIE IN A FIERY CAR AND TRAIN ACCIDENT!!!!!!!!!!!"  or perhaps just "oh my GOD!! I am SO in LOVE with Jordan from New Kids on the Block! I think if I can just get my mom to let me go to their concert at the hockey stadium, he'll see ME in the crowd and just KNOW that I am PERFECT for him!! Maybe he'll even call me up on stage! Oh my god!!!!! Then I can leave this house, I HATE IT HERE!!!!!"

Locks on diaries and box springs under mattresses were invented because kids don't generally want their parents to know that they'd like to kill them, or at least see them killed in a violent way. Those are private wishes. And we usually get over it by the time we realize that our parents are key factors in getting things like...Money. Cars. College. Apartments. Suddenly the advantage of having parents becomes clear, and we decide to put up with them. Eventually we might even like them, a lot.

Likewise, we don't want our best friend to know we're pissed at her, because at that age we haven't developed our communication skills, so we use journals to vent about how stupid she is for wearing the same shirt as us, in a prettier way. Then we get over it. By Monday morning all is normal and BFFy in the hallways.

Here's the flip side (you knew one was coming). In a way, keeping a diary can be a very exhibitionist practice, too. For me it was, anyway. I would write - in code that would never make sense to anyone else - a very clear game plan for how my misery could be diminished and the reader could therefore save me. Oh, and whisk me off into the sunset. "I shall be down by the pond's edge, picking dew-covered grass in the waning sunlight...." It's possible that I had a pretty well developed Knight in Shining Armor fantasy going for me. I sort of still do. But a girl can only sit on the wet grass for so many hours before she realizes that no strapping 8th grade boys have snuck into her second-story bedroom, found her hidden journal, decoded it, found a white horse, and are on their way to the pond's edge.

While I entertained fantasies like the above, I still kept my diaries hidden and didn't make them public. That would be dumb. No one writes in their diary thinking "I can't wait to show this to my friends!" What those friends would find there can usually be categorized as 'incriminating', or perhaps 'humiliating'. But sometimes, word gets out. 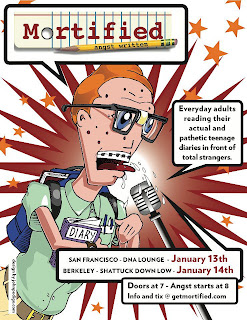 A while ago, I found my old middle school diaries and had so much fun reading them I scanned them into Facebook and tagged all of the people I'd mentioned there. I went to school with the same people from Kindergarten through Senior year, so I still know most of them. They were just as amused as I was, and I became obsessed with hearing people's stories, as told through their younger journaling selves.

Apparently, I'm not the only one with this curiosity. I've mentioned Mortified once or twice before - you know, the show where people get up on stage and read from their old diaries. During each performance, a few different people get to climb up in front of a sold-out crowd of strangers and flash them with their private thoughts. It's amazing - what was so incredibly important and Earth-Shakingly Serious to us 20+ years ago is a source for hilarity now. In a way, I wish I could explain this to kids when they're sobbing into their pillows about some asshole dumping them - that one day the story of how it happened will be plain-old freaking funny. But then future generations would miss out on hearing these stories, told in this way. And those telling them will miss out on the redemptive quality of having people laugh at their angst-filled memories.

And yes, I'll be performing in this weekend's Mortified shows, if you want to witness me flashing my privates.
Posted by Amanda Janik