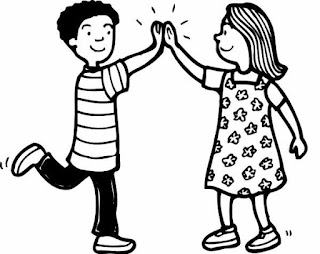 So I just received the final invoice from my daughter's preschool, which stated the following magical glowing words: "This will be your last payment." Sweet mother of jesus!! They really should write that in gold shiny glitter glue or something, it would make it even that much more exciting!

Reading this immediately made me envision being in the same room with my ex, saying "holy shit! Can I get a high five?! Woo hoooooo! We did it!! FINALLY!"

This of course means that Evie will be starting Kindergarten in the fall. The other night was Open House, and Jonah took it upon himself to play tour guide for his sister. Watching him lead his Number One Fan around - being all big-brothery, showing her the classrooms and explaining all of the fun stuff she'd get to do - resulted in nothing less than giddy googly-eyed pride in me. Despite whatever is going on outside the school walls, I really wanted to share this accomplishment with the person who helped me create these incredible kids - I mean, this is a big deal! And it is AWESOME! I didn't really get the vibe that this sort of celebratory reflection would be welcomed, though, so I resisted the impulse to reminisce. Or to ask for a high five.

With the need to reflect on the fact that my lastborn is heading into big-kid school soon, I got way off-track when I stopped by the playground after Open House and watched some of the kids play. My favorite thing to do is watch Evie interact with other children. Maya Angelou says "I love to see a young girl go out and grab the world by the lapels. Life's a bitch. You've got to go out and kick ass." Evie is always grabbing the world by the lapels.

She'll climb to the top of the jungle gym, find another kid there, and say "Hi, I'm Evie, do you want to be my best friend?" Usually the other kid says yes, and off they go! Sliding, swinging, holding hands, giggling. It's truly an amazing life lesson. I tried it out on an adult once (Scott Keneally). It didn't work.

Every time I witness Evie's ease with her peers, I feel a renewed wish that interpersonal relations stayed that sweet and simple forever.

These days, if I find myself in a situation in which there isn't a friendship where there once was, I'm trying to make a point to let go of all of the grown-up issues that put the relationship in that position, in hopes that one day it might be repaired. Because people are all kinds of complex! For some reason I keep forgetting that. You forget it too - don't lie. How could we not? We aren't kids with simply I Like You/I Don't Like You as credible options anymore. So much of how we react to each other revolves around our complete, stubborn inability to soften up on ego, pride and, my god - all those emotions! So many things to consider! Love! Hate! Compassion! Anger! Disappointment! Renewal! Guilt! Shock! Jealousy! Elation! Forgiveness. Ugh.

Luckily, through the power of tooth-and-nail experimentation, I'm finding that it takes so much less energy to let go of dissonance than to keep the fire below it burning.


Maya says it better, of course: "We cannot change the past, but we can change our attitude toward it. Uproot guilt and plant forgiveness. Tear out arrogance and seed humility. Exchange love for hate; thereby, making the present comfortable and the future promising."

Dude, that lady knows what's up! Dr. Angelou has been guiding me through all kinds of bullshit, for all kinds of years. She's a pretty important personal hero of mine and, let's face it, she rocks the wisdom! In fact I saw her speak several years ago, and the moment she walked onto the stage I was so moved by her mere presence near mine that I immediately started crying. No joke.

So I take her words to heart, on a regular basis. Or, when I can. "I did then what I knew how to do. Now that I know better, I do better."

I think my daughter already has a pretty good idea of how to do friendship. She'll likely unlearn it, but if she's lucky, she'll relearn it, and excel at it. She'll probably major in it in college. (With a minor in ass-kicking).

While I wait to see what happens with her, I think I'll keep working on that high five.
Posted by Amanda Janik