Everybody Poops - Including Me!

A short while ago I was revisiting some old blog posts and came across this one about the troubles and stresses I had trying to mix a healthy, function colon with an active dating life. It happened to be six months to the day since I'd posted it, so I started thinking about how much had changed in that time. Oh, what a difference a half-year makes! 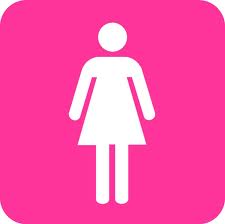 Shortly after posting that I decided to stop dating for a while, as it was proving to be both tiresome and disappointing. Most of all I just really needed to get my digestive system back in order. I once again got lazy and took for granted the glorious and luxurious fact that I could use my bathroom for whatever I wanted, whenever I wanted.

Then I unexpectedly met Paul. Not only did he become my actual boyfriend, he has an actual toilet, which I am encouraged to use as if it were my own, la la laaaaa!

I've been able to let go of quite a few of my fears around delving into a new relationship. After I took some time to wrap my head around the idea, I decided to finally take Paul up on the drawer he'd offered me months ago. I went to a clothing swap and scored some things to fill it with, if only so he'd stop nagging me. And sure, most of the clothes I took ended up having belonged to his ex-wife...but whatever, he didn't notice. There are other things I've decided are finally okay to move forward with as well. We RSVP to things as a couple. We've started the whole 'spending the night...even when kids are there' thing. We make plans for events that will take place further into the future than one week, sometimes even further than one month. We've even combined Netflix accounts!

His bathroom is located between two bedrooms - Paul's on one side and his 13-year-old son's on the other. There are currently no locks on either door. There's no fan and very little noise barrier. I've gotten past a lot of my qualms around all of these things and mostly trust the whole 'if the door is closed, no one will open it' system that seems to be in affect there. But still, when I'm there I don't even pee nearly as often as I normally would. I sure as hell don't shower when his son is there - I don't want to be the one responsible for traumatizing that sweet kid should he sleepily walk in on me puzzling over an inconveniently located ingrown hair some morning.

So, as you can probably guess, I absolutely don't poop there.

Well - let me clarify: I don't poop there when anyone is home. If I've stayed the night and it's just me and Paulie, I usually have to rush off to work the next morning so it's not a huge issue, I can just take care of (bathroom) business at the shop. It still takes a little creative timing between tea, toast, and leaving the house; but all in all, I manage. When his son is there, it's a different story.

On those mornings I wake up earlier because of the two males tromping in and out of the bathroom for various 'getting ready for stuff' activities. Once I squint open my eyes for a half-second, my body begins it's "oh, so its time to wake up now? Awesome!" routine. However, I'm way too afraid that one of them will be in a rush and therefore not be attuned to the panicked Do Not Enter vibes that I'd be sending from inside the bathroom.

To be on the safe side, I generally just lay very still, pretending to sleep the whole time, and wait for them to leave. When I can tell that the hullabaloo is dying down and I finally feel Paulie's kiss on my head, my body immediately begins buzzing. Not in the sexy way, but in the they're leaving soon and I can finally use the bathroom way.

After they leave, I listen attentively until I'm sure they aren't returning for a forgotten school book. Then I throw back the covers, slide out of bed, and saunter into the bathroom, pleased and relaxed, where I MAKE IT MY OWN!

So I'm learning, people, I'm learning. I know that one day I'll have the flu or get food poisoning and all romance will be out the window as my ass and face explode at the same time and Paulie stands in the doorway; shocked, speechless, and wondering how to escape without seeming insensitive. But in the meantime, my body will continue its confused dance of Red Light Green Light, and we will all be happier for it.