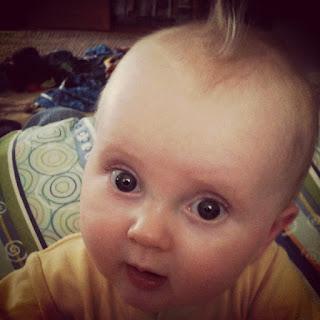 I haven't posted on the blog for a while.  I'd love to say it's due to the thrilling fast-paced whirlwind that is my life as a rock-star daddy, but really it's just that I've had nothing to share.  Life has been blissfully dull.

Finn is good.  He's 7 months old now and he's really into solid foods which makes it easier to know when he needs to be changed...which is handy.  Liam is quickly approaching 3 and now that it's warm out is spending every waking moment on our back deck, as nude as possible, playing in his water table.  Occasionally we catch him drinking from his shoe which is a little weird but generally it's a healthy past time.  Erin and I are also doing really well.  After advertising for months on Craigslist we finally sold our car, which is nice.  The hooptie is scheduled to be roadworthy this Thursday if all goes to plan.  Erin has been cruising around Uncle Buck style in a 1983 Chevy Caprice station wagon that someone loaned us in the interim.  She's hated it (inexplicably since it's awesome) so with that gone, and with the money we made on the deal, she's pretty thrilled.  In fact to celebrate she's taking Liam down to Disneyland this weekend (Finn and I will be holding down the fort bachelor style - LOOKOUT LADIES!!)  I'm happy the deal is done too mainly because we won't have the cast from One Flew Over the Cuckoo's Nest dropping by the house for test drives (seriously Craigslist, WTF!?)

All in all things are great........which makes me uneasy.  I'm not a particularly superstitious person but times like these always feel like the calm before the storm.  I can't really recall a time in my life when quiet contentment has lasted for a long stretch, so stay tuned.  Something big is going to happen soon I'm sure, I just hope it's something good.
Posted by Unknown