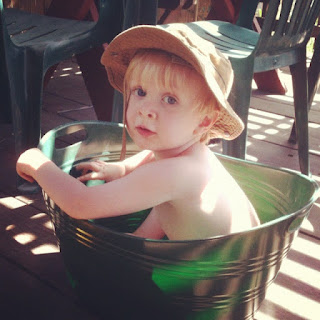 Liam just changed his own diaper.

I'm not really one for building up a story.  Besides that's really the entire story right there.  He changed his diaper.  He was supposed to be napping (hence the nap-time diaper), but I could hear he wasn't, so I peeked in on him.  He was playing with his toys and enjoying them more than usual because he knew he wasn't supposed to be.  The scent in the air told me something was amiss so I asked "did you poopie?".  "No" he lied.  I investigated and found that he was, in fact, wearing a clean diaper....backwards.  About three feet away was his pooped-filled diaper.

That means he dropped a load and thought, "Eww, well this won't do.  I'll just slip this off aaaand...yup, that's better.  Let's see now, I could go find daddy for the rest but he'll play that whole 'why aren't you sleeping?' card and I really don't have time for that today.  I'll just go ahead and grab one from this box here......hmm, this over here, that over there.....there, that looks about right!"

Really??!!  How much simpler would it have been to just go use the bathroom??!!  He knows how I get when he does.  Is he denying me my greatest joy just because??  Sadistic little fartknocker!!  WHY??!!

Maybe just to get a reaction.  Ya think?

The little bastard is effing with me.  He can probably do everything I do for him, by himself.  He can probably dress himself, wash himself, and could probably even communicate just fine but fakes it because the speech therapist's toys are way cooler than ours (they really are).  What's next, am I going to find him making grilled cheese at 3am?  I'm fine with that.  In fact it's about time that boy learned to make a decent bloody mary.
Posted by Unknown