If I had a nickel for every blog post I've written that I then couldn't publish because it would piss someone off and maybe even get me into a little trouble, I'd have about 45 cents. This might be one of those posts.

Remember when I wrote about how I'd unintentionally gotten super hot after my marriage went to hell? Somewhere in that blog post I predicted that I was aware of the fact that the weight likely wouldn't stay off forever, so I'd better enjoy it while it lasted. And enjoy it, I did! I wore bikinis and short skirts and walked around in all states of undress, just because I could.


Lately, though, I've noticed that telltale tightening of the pants. I've had to do more hoisting, more squeezing, more quizzical studying of my reflection in the mirror, thinking "can I seriously pull this off?" It's been a while since I've done this, and I sure didn't miss it. Let me say here that I don't give a flying patootie what other people's bodies look like. I just have a certain image of myself in my head, based on the better part of 35 years' worth experience seeing it as such. And just as I hadn't noticed the weight coming off a while ago, I was clueless that it was coming back on.

It's funny, because in that old post, I knew what I had to do, but I didn't listen to myself: "I realize that in order to keep my new fantastic-looking body, I need to remain depressed, angry and bitter. Under NO circumstances must I become too smitten with someone or, heaven forbid, start going out to eat or letting someone feed me delicious meals. I MUST NOT fall in love."

What did I do? I got happy. I let go of my anger. I became smitten. I started eating. Not just meals, but snacks too. That's right - I fell in love with a snacker. Pretzels and chips and salsas and cheeses and experimental things in the oven at all hours of the night. One could say I was totally fucked from the beginning. If I'd been paying attention it's possible I could have stopped the eventual spillover of my love handles, but the whole point is that I've never payed attention to these things until it was too late.

So of course I've been musing about this to my lover. "Jeez, I'm getting kind of fat again," I'll say, patting my fat roll. To which he replies "hm, well, what are we going to do about that?" I have various responses to this, most of which can be summed up as "Stop fucking offering me snacks all the time!"  I know I should stop here and complain that he doesn't say "psh, you're crazy, woman! You're beautiful and I'd love you no matter how fat you got!" but I have a better sense of humor than that, so I'm not going to pretend that I care all that much, as long as he doesn't become a dick about it.

If I didn't have said sense of humor, the following conversation might have seemed somewhat dickish:

Him: If you get too fat I'll break up with you
Me: Oh yeah? Ha! Jerk.
Him: Ha, okay, you're right. I won't really break up with you.
Me: Oh thank you. You're so good to me, baby.
Him: I just won't be attracted to you anymore. So, I won't want to have sex with you, and I'll become distant... so you'll end up breaking up with me.
Me: (pause, disbelieving stare, then uproarious laughter) Um - oh...my...god. Ha ha ha haaaaaa! I can't believe you just said that out loud.
Him: I know!

At least I know what I'd look like if things got out of control. Several years ago I was looking for a picture of three wolves howling at the moon (because that is a completely normal thing to be looking for), and I found this: 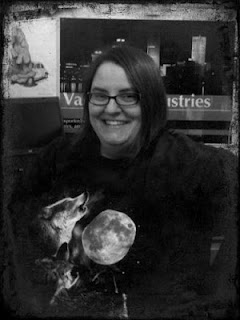 I don't know who that girl is, but she looks just exactly like me (aka cute, plucky and awesome!). It's spooky to come across a picture of your twin wearing a three wolves howling at the moon sweatshirt on the internet. It is also very useful.

I'm going to print several copies of this picture out and put them up all over my boyfriend's house, so he can get used to the idea. Just in case.