On Friday morning I went for a jog around Spring Lake. I do this from time to time, and am getting pretty good at it, but this time I just wasn't my streamlined efficient self. I felt clunky and was easy to tire. I walked more than usual, but I blamed it on the inconsistency of peppiness in my choice of music. 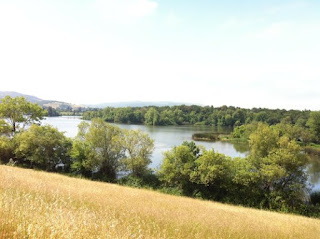 When I'd finished, I went home and showered, and started to get ready for my day. I felt really lethargic, which is the opposite of how my run tends to make me feel. My muscles felt achy, which was too soon for having just run an hour ago. I noticed that the skin on my lower back started to feel kind of tender to the touch. And then it hit me - I was freaking sick.

I haven't been down-for-the-count sick in almost a year. I was grateful that the kids were at least with their father instead of asking me slice them more apples and take them to the park to play catch.

I lay down in my bed for a little nap, figuring that would fix things. I'd promised to take Paulie to pick up his truck (another story) later that afternoon, so I set my alarm and fell into a fitful, fevered sleep, waking every 4 minutes or so to the sound of my pot-hacking neighbor and his friends.

When my alarm went off, I dragged myself to Paulie's and then Paulie to his truck, and was then told to go home and sleep. By 'home' Paulie meant his place (this used to annoy me. Now I find it somewhat endearing). He had a few errands to run, and said he'd meet me there later. I followed his orders like a sweaty, shaking robot. I made it 'home', crawled into his bed, and promptly slept the sleep of the sickly.

When I woke again, the most amazing thing was happening: Paulie was taking care of me. He felt my forehead, frowned, brought me icy ginger ale, warmed up some homemade chicken soup, gave me some Advil, and made sure I was comfortable. He actually initiated all of this on his own - and stuck around to make sure I had everything I needed. He didn't seem irritated by my being sick, even a little bit. He didn't stare darkly at me for five full seconds before inching forward to collect my empty soup bowl with his arm outstretched as far as it could go in an attempt to avoid contact with me or my germs. He didn't say "I seriously can NOT get sick right now, don't even come near me!!" Not that I had the energy to come near him anyway, but still - I didn't have to! He was right there next to me! Offering me a drink of water out of his glass!

I was blown away. I could only stare at him through my woozy-sighted eyes in wonder. I'm not exactly used to this type of treatment when I'm sick, and I honestly didn't know how to handle it. Luckily I didn't really need to, since my response of immediately falling back to sleep after eating my soup was completely justified and acceptable.

After I'd mostly recovered, save a few more fevers over the weekend, I was thinking it might not be so bad to get sick, what with all this loving and nurturing stuff happening. It's kind of awesome! But then I remembered what always comes with bad fevers - Cold Sores. Dammit!

See you all in two weeks.
Posted by Amanda Janik