Every once in a while I just like to take a quick snapshot of life as I know it these days.  I do this partly so I can look back one day and remember the details of the blur that was my childrens' early childhood, but also so my friends will have an answer to the question "how come he never calls?"  Here's a little journal of our activities from Monday.

Finn just set himself on fire...or so I assumed by the sound of it.  It turned out he was just hungry.  I guess he's going through another growth spurt and the 9500 calorie dinner he ate isn't going to hold him until 6 am like we'd hoped.

Liam woke up sounding terrified and crying out my name.  I dashed to his rescue.  He was out of water.

The boys woke up trying to out-scream each other.  I think they were trying to harmonize.  It sounded like the dial tone in hell.

Liam ate half a piece of toast that touched some egg and was an inch away from a pear slice.  I think that counts.  Finn had two eggs, half a pear, a slice of ham, half a tortilla, two strawberries, a fistful of Cheerios, and Liam's breakfast.

I dropped Finn off with just a bottle and a snack bar.  He hadn't eaten in an hour and was looking peckish.  Hopefully the daycare lady left her dog dishes out on the floor again so he can get some protein.

Teacher Julie assigned me "outside" and instructed me on how to set up an obstacle course.  Then she told me that the kids could go through the course as many times as they wanted but I had to make sure that they formed a single line, waited their turns, and followed my detailed instructions, while I made sure they didn't fall to their deaths and took notes on each individual's performance.  Later on I'm going to unwind by training kittens to ballroom dance while spinning flaming plates on my kneecaps.

I think my spine is bleeding.  Children should be lighter and farther from the ground.  I picked Finn up from daycare.  He hadn't napped due to hunger which is just as well.  I have three hours to get them fed and rested so the more exhausted he is, the better.  For lunch Liam is having PB&J with the crusts gnawed off (by me, yay food!) and Finn had everything else in the fridge.

I'm scouring the house for the flash drive I've been desperately hunting down for a good four days.  It only contains all my major financial files, my most cherished family photos, my resume, and the only copies of the Bairdsmith wine labels.  I naturally assume it's being slowly digested by Finn and I'll find it soon enough.

Finn woke up after just 20 minutes because we haven't yet figured out a way to feed him while he's sleeping.  Liam is up too, but never actually fell asleep.  I forgot to drink anything except coffee today so I thought I'd pour myself a huge glass of water, then leave it unattended.  This led of course to an impromptu carpet cleaning.  Now I've moved onto folding laundry which coincidentally lead to me finding my missing flash drive (In the dryer.  Everything was completely intact.  2GB Kingston DataTravler - buy it.)  I'm averaging one folded shirt for each book handed to me for immediate reading.  Not a bad ratio. 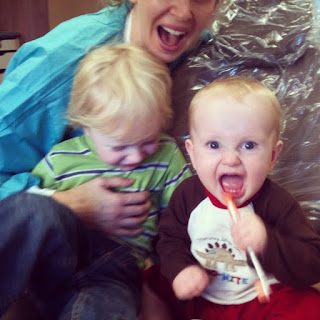 This is Liam's first dental appointment.  Well, not counting last week where he got a prize for sitting in the chair without freaking out for thirty seconds.  I'm hoping today he opens his mouth.  Erin is of course tending to him.  When we showed up she gave me a look that said, "We, as a general rule, don't serve people who look and smell the way you do because A) billing hobos is rarely successful and B) your presence is compromising our adherence to a sterile work environment. I need to get a photo of her on her day off with the boys in case this comes up again.  She then asked if I'd brought a pacifier to keep Finn preoccupied.  I told her no but I had brought the next best thing: Two pounds of cheese and three nectarines.  He was completely satisfied for 10 minutes.  He threw his last bite on the floor so I asked Erin "What's the five-second-rule in a dentist's office?".  "Much shorter" she answered.  Liam actually opened his mouth (hooray!) but then shut it again before Erin could get clear.  She noted that it was the worst bite she'd ever received from a patient.  I noted that Erin is regularly bitten at work enough to have a rough rating system.  I bet there's some way we could make money suing ourselves.

If Liam isn't sleeping he's at least in his room not sleeping quietly.  I'll take it.  Finn is so thrilled by his new found speed-crawling skills that he's taken to keeping his head down, eyes to the ground, for better aerodynamics.  He's getting up to about 7 mph before he blindly smacks into something.  I've put pillows up around some of the harder furniture.

I actually managed to clean the entire kitchen and wail on a bit of laundry.  Erin is taking Finn to the gym with her but leaving Liam since he finally did fall asleep.  I have an hour and a half to make dinner.  Tonight's menu will consist of whatever time (and motivation) will allow.

Dinner for her is non-existent, as is the bottle of wine I'd opened for "us".  The half folded pile of socks next to me isn't going to be enough to distract her from this fact.

The boys are fed, washed, brushed, and in bed.  Erin, not so much, but she is a merciful and understanding wife.  There are still a few things to do to get the house ready for my parents who are watching the boys tomorrow.  I can either do them myself, or I can try and fall asleep before she gets out of the shower and let things sort themselves out.  I could at least go feed the...zzzzzzz.
Posted by Unknown