When my son was a baby, his dad and I spent a pretty decent amount of time talking about how goddam gorgeous he was. How he'd be so popular with that sunny personality, a lady-killer with those eyes. I mused that maybe I'd get lucky and he'd be gay and I'd finally have someone to help me learn how to dress myself and put on makeup, but my ex didn't care to skip along with me down that fantasy lane.

So now Jonah is 8. He's...kind of a nerd. Okay, he's a total nerd. And this thrills me, just as much as if he decided to come out of the closet later today. He's got a lot of my personality traits - he reads novels while circling the track with his entire school during Walk-a-Thon fundrasiers. His eyes go dull and he stares blankly and straight-faced when someone is talking to him about something he either doesn't like, or simply has no interest in discussing. He makes sarcastic comments like "geez, I think that car might need some stickers on it." I look at said car and reply "that car has a TON of stickers on it, there's no room for any more!" to which he replies "mom. I was practicing my sarcasm." Ha! Good one, kid.

He's actually got a lot going for him. Sure, he's maybe a little bit obsessed with Pokemon and Legos still. But fantasy and imagination and engineering skills aren't so bad when mixed together. That could turn into something. And a crazy opium-eyed old fortune teller on a side street in Korea once told me that my son would take good care of me when I was older, so I'm really counting on a lucrative career for him. (Actually, that's how I took the rough translation, which came out more like "you work really hard, with very little help. He will help you.") 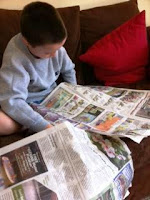 There are a few things about Jonah that might not get him laid later in life though, and I'm not sure how to correct them. He has this weird habit of grabbing himself in the buttcrack. What is that?! He also has a terrible, terrible haircut. All the time. I keep waiting for it to get long enough to take him to the barber, but just when it's almost there, BAM! He shows up on my doorstep with a poorly executed back porch buzzcut that screams "I live in a trailer park and have head lice!" Yes, I've expressed my distaste for this particular style of hair. I'm pretty sure that's why it keeps happening.

Also, since Jonah was old enough to dress himself, I've let him. Same with my daughter. The results are always amusing and my theory was - and is - that they should have confidence in what they feel good wearing while they have the chance. I figured that once they hit public school they'd quickly get sucked in to following the herd. Peer pressure sucks, but it's real. Or is it? 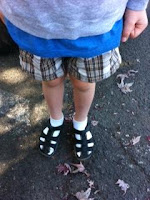 On Jonah's first day of 2nd grade, he insisted on wearing his pink Boys Can Wear Pink tee shirt, so that "everyone will know it's okay for boys to wear pink!" You can imagine my reaction to this. *tear of joy!* Lately he's taken to dressing and acting like an old man. He'll put on some pilled-up navy blue trousers that are a good 2 inches too short for him, and an oversized brown thermal shirt with a button missing. Sometimes he'll throw a mustard yellow and turquoise striped tie over the whole thing. He wears socks with sandals. He enjoys relaxing on the couch, reading the paper.

This morning over breakfast he asked where I'd gotten the flowers that adorned the table. I told him where, and that they were called Gerbera Dasies. He said "well mom! They're Beautiful! Just...gorgeously beautiful. And wanna know why they're so beautiful? Because you bought them. And you're beautiful. Hm!" I'm not sure why, but this instantly reminded me of a time I was sitting in my car on the street in Oakland, and a jaunty, very old man appeared with a hat on, light scarf around his neck, carrying a bouquet of flowers. He slowly and carefully crossed the street in front of me, and I watched him until he was out of sight, imagining where he was going, who the flowers were for. I found it so sweet. I hope this is Jonah some day.

So none of that is all that bad, even for a nerd.

That kid is goddam gorgeous.
Posted by Amanda Janik