Pixar movies have been our go-to over the years when we need a substitute 'parent'.  Who can parent all the time?!  Strangely though, in the past few months, every time I ask Liam "what do you want to watch?" expecting to hear "Wawee" (Wall-E), "House" (Up), or "Mater" (Cars 2) his answer has been "Aya Wii, HOO-HOO!!" 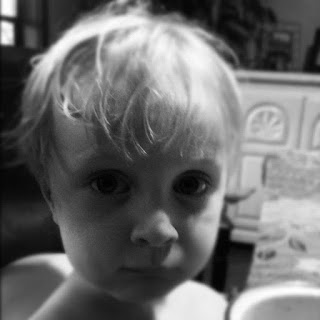 It took us a couple of days to figure out what that meant.  We figured it out but the answer left us even more puzzled.  We have a Nintendo Wii with only one video game: Mario Kart.  When you switch it on there's a little shimmer noise followed by Mario announcing the game's title "Mario Kart Wii, HOO-HOO".  Naturally Liam thinks that's what it's called.  The Mario Kart part is a little too tricky for him to say so he shortens it to "Aya".  It's now his most requested thing to watch.  It's also his answer when you ask him what book he wants to read, what he wants for dinner, and if he needs to go potty.

Yeah, we get it.  Apparently Liam really loves watching me and Erin play Mario Kart.  It could be the action, it could be the music, or maybe it's just be the seizure-inducing lights, who knows.  The problem with us playing a video game though is it negates the beauty of having something he can stare at while we do other things.  Consequently, we rarely indulge him in this request but that doesn't curb his asking.

Last night we thought we'd treat him.  Even though he was reading (bad parent!) I cranked up the volume from the other room and Erin filmed his reaction when I turned on the Wii (the audio is key on this):


I don't know if that's cute, funny, or disturbing but I've watched it thirty times so I thought I'd share.
Posted by Unknown