A Visit from my First Boyfriend

The other day I was at work, minding my own business, when I got a text. It was from my first boyfriend, we'll call him "Scott" because that's what I called him in this post from last October. (Not to be confused with any other Scott who has appeared in this blog in the past. Completely different Scott).

I should say here that aside from a comment or two on facebook over the years, I have not seen or been in any real contact with this person since I was 18. But to receive a text saying "hey this is Scott, I might be in San Fran later today, wanna hang out?" didn't strike me as that odd. Between school and camp and various jobs I've held over the years, I get texts or emails like this from time to time. Usually with a little more notice, but hey, I can roll with any variety of punches.

I was super busy at work that day so I didn't put too much thought into his visit aside from making some very basic arrangements. I was stressed and so as the night wore on, his texts about flight cancellations and emergency landings and lack of available flights just sort of went in one eye and out the other. I thought we'd have to put our catch-up visit on hold until the next time he had some crazy layover in the city. 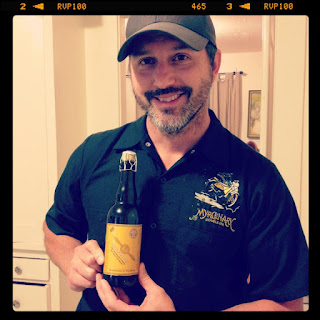 But the next day he was in my car, in Santa Rosa, and we were heading to the Russian River Brewing Company. Apparently he's some sort of important beer nerd, so he was pretty excited about this. Like, palms getting sweaty and eyes growing wide and a little bit crazy the closer we got kind of excited. I told him that Paulie and I had a Beatification from RRBC that he could have. His reaction was the same as when I agreed to have sex with him the first time - "Oh...my...god. Are you serious?!" (side note: I tried the beer. I'm incredibly unqualified to do this, but here is my review anyway: Meh.)

As we made our way to the brewery, I asked when he was flying out. He didn't really have an answer for this. Instead he indicated that maybe he'd just "take a bus back," or "rent a car"...when his "money came through." I laughed and said "oh god, is this going to be one of those situations where you show up and just...never leave? Ha ha ha!" He just chuckled and said "heh heh....heh, no....." and looked off into the distance.

For all of my talk about growing up with men and having some sort of insight into the male psyche, sometimes I'm a little slow. It took me several hours and a few subtle clues to figure out that Scott was, perhaps, going through one of those midlife crises during which men look up old girlfriends. Apparently lots of people do it. In fact Paulie did it. So, okay. No big deal. I figured I could dodge whatever intentions he had fairly gracefully. I mean, we were a couple ages ago! It's not like me rejecting him now would break his-- oh, shit. I forgot. I broke that poor young man's heart.

I'd sort of blocked out that detail until we were two beers in and somehow got on the subject of, well, old stuff. He reminded me of the entire winter I thought I had scabies (ahhh, memories). I asked him to refresh my memory on how in the world my mother had ever let us go on a date when I was a mere 14 years old (by using incompetent brothers as chaperones). He said he'd recently found an old picture of me in "that black dress" I wore all the time - the one with shoulder pads that made me look like a skinny football player. Or a short Anthony Kiedis in drag. When I wondered at how he managed to still have such old photos, he said "well, you know, I mean come on - you were my first love...first heartbreak.... Gotta keep those pictures! Heh..." (looks off into distance). As I do in all situations in which I feel awkward (aka - most), I laughed too loudly. Then said "welp, time to head over to MY BOYFRIEND'S HOUSE for dinner!"

How do I get myself in to these situations?! Mike says it's because I'm terribly, terribly naive.

I braced myself for the inevitable question - whatever that would be. I wasn't sure what to expect. But as time went on, it didn't come. Huh, I thought. Maybe he's not pining away for our lost teenage love after all! Hm! Just to be sure, the next day I asked him how he was feeling about all of the big changes happening in his life. Except I worded it more like "so, do you think you're going through some sort of midlife crisis or something?" He asked me to define Midlife Crisis. "You know, you get to a certain age and start questioning all the choices you've made in your life, feeling like the grass is greener elsewhere, regretting things, deciding to try again, take more risks...things like that."

He thought about this for a beat and said "nah, that's been my whole life. My whole life has just been one long midlife crisis. I can handle all this stuff. It's just sort of overwhelming being here with" (here it came - the big, torch-carrying confession...) "Russian River being right down the street from your apartment!"

And that was the end of that.

I realized that actually he'd just gone out of his way to postpone connecting flights, put off some business, and shuttle from San Francisco to Santa Rosa then back again for one simple thing: Beer.

I hope it was worth it!